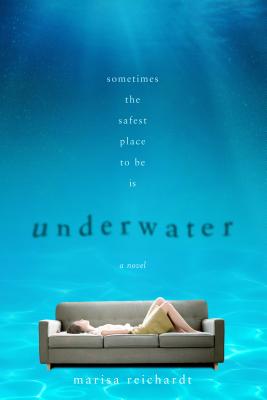 Morgan didn't mean to do anything wrong that day. Actually, she meant to do something right. But her kind act inadvertently played a role in a deadly tragedy. In order to move on, Morgan must learn to forgive—first someone who did something that might be unforgivable, and then, herself. But Morgan can't move on. She can't even move beyond the front door of the apartment she shares with her mother and little brother. Morgan feels like she's underwater, unable to surface. Unable to see her friends. Unable to go to school. When it seems Morgan can't hold her breath any longer, a new boy moves in next door. Evan reminds her of the salty ocean air and the rush she used to get from swimming. He might be just what she needs to help her reconnect with the world outside. Underwater is a powerful, hopeful debut novel about redemption, recovery, and finding the strength it takes to face your past and move on.

Praise For Underwater: A Novel…

"Debut author Reichardt doesn’t oversimplify: Morgan isn’t saved by love; rather, new neighbor Evan reminds her of life and what it’s like to have a friend. As Evan, who has his own connection to the shooting, tells her, what he likes about Morgan is that she’s real, and that’s exactly what readers will appreciate about this book." —Publishers Weekly, starred review

"Debut author Reichardt smartly reveals the source of Morgan's agoraphobia--a school shooting--very gradually, which, along with the sweet romance with Evan, urges the plot forward. Morgan's... story of growth and redemption will be rewarding for readers who love character-driven novels." —Booklist

"Readers will enjoy the emotional balance Reichardt gives to the high stakes conflicts in a teen’s life." —School Library Journal

"A moving, reflective exploration of grief, trauma, and how individuals find their paths toward resilience." —Kirkus Reviews

"While this is a tender and appealing romance, it would also make a thoughtful complement to the many books about school shootings to illuminate the effects that last beyond the horrible day."— Bulletin of the Center for Children's Books

"Reichardt's remarkable debut novel, told in Morgan's voice, is a sensitive and inspirational exploration of the aftermath of tragedy and of a young woman's grief and guilt. Young adults will enjoy sharing Morgan's passage from hurt to healing." —VOYA

Marisa Reichardt lives in Southern California with her family. Underwater was her debut novel.
Loading...
or
Not Currently Available for Direct Purchase