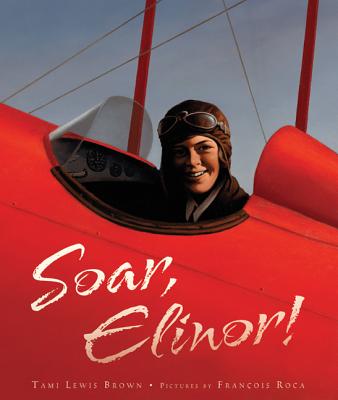 Elinor Smith was six when she first went for a ride in a rickety "flying machine," and she was just sixteen when she earned her aviation license in 1928. But not everyone thought that girls should fly. When male pilots and newspapermen mocked her, Elinor decided to perform an aerial maneuver they thought was impossible: flying under all four bridges that span New York City's East River. Gorgeous sweeping illustrations by François Roca show how Elinor pulled off this risky feat skillfully and with style.

“François Roca's oil paintings capture [Elinor's] sunny determination as well as the lure of the wide skies and the open cockpit.” —The Washington Post

“Look out, Amelia Earhart. This underdog story features a lesser-known female pilot who gained eminence in the 1920s. At age 16, Elinor Smith became the youngest pilot in the U.S. But when newspapers belittled her accomplishment, she took a dare to fly under one of New York City's bridges–upping the ante by flying under four of them. . . It's a stirring tale of determination and moxie.” —Publishers Weekly, STARRED review

“This is an excellent introduction to a lesser-known but fascinating adventurer.” —School Library Journal

“Inspiration soars from every page.” —Booklist

Tami Lewis Brown is the author of the novel The Map of Me and the picture book Soar, Elinor!, illustrated by François Roca. She holds an M.F.A. in writing for children from Vermont College and lives in Washington, D.C.

FRANÇOIS ROCA has illustrated many picture books, including Twenty-One Elephants and Still Standing by April Jones Prince and Muhammad Ali: Champion of the World by Jonah Winter. He lives and works outside Paris, France.
Loading...
or
Not Currently Available for Direct Purchase