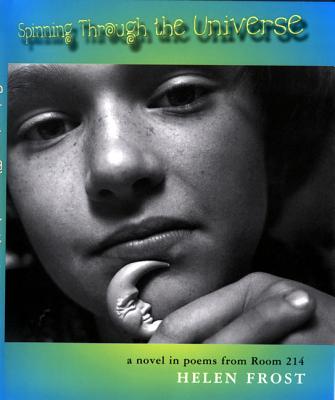 Spinning Through the Universe

A Novel in Poems from Room 214

Engrossing tales from the fifth grade

Every child is like
A little world with ever-changing weather,
Nights and mornings. And somehow, here we are,
Spinning through the universe together.

Unforgettable students in this fifth-grade classroom reveal their private feelings about birth and death, a missing bicycle and a first kiss, as well as their thoughts about recess, report cards, fitting in, and family.

Using a rich array of traditional poetic forms, such as sonnets, sestinas, and acrostics, Helen Frost interweaves the stories of the kids in Room 214 and their teacher. A final section giving detailed analyses of the twenty-two forms will be of special interest.


Praise For Spinning Through the Universe: A Novel in Poems from Room 214…

"Appropriate, original imagery and understated, natural voices make these poems sensitive and insightful...The notes on how the form in each poem works are of particular value to teachers eager to guide students in their own poetry writing." -- Starred, Kirkus Reviews

"Poignantly conveyed...Readers may be surprised at the complexity of the rules governing the writing, so naturally does the author seem to capture the poetic essence of the children's voices - she makes it look like so much fun that readers may want to try some of the forms themselves." -- Starred, Publishers Weekly

"Written in verse, each student speaks in a unique poetic voice whose form is explained in detail in a 'Notes on Forms' section...Interwoven dramatic stories and interesting poetic patterns give this book extra appeal. A boon for poetry classes." -- School Library Journal

"Frost presents realistic problems in young people's lives in a gentle, almost tender fashion. Her poems truly capture the essence and pathos of a classroom full of unique young people. Many readers will find someone that they know here." -- VOYA
"Fascinating." -- SIGNAL

Helen Frost is the author of several books for young people, including Hidden, Diamond Willow, Crossing Stones, The Braid, and Keesha's House, selected an Honor Book for the Michael L. Printz Award. Helen Frost was born in 1949 in South Dakota, the fifth of ten children. She recalls the summer her family moved from South Dakota to Oregon, traveling in a big trailer and camping in places like the Badlands and Yellowstone. Her father told the family stories before they went to sleep, and Helen would dream about their travels, her family, and their old house. "That's how I became a writer," she says. "I didn't know it at the time, but all those things were accumulating somewhere inside me." As a child, she loved to travel, think, swim, sing, learn, canoe, write, argue, sew, play the piano, play softball, play with dolls, daydream, read, go fishing, and climb trees. Now, when she sits down to write, her own experiences become the details of her stories. Helen has lived in South Dakota, Oregon, Massachusetts, New York, Vermont, Scotland, Colorado, Alaska, California, and Indiana. She currently lives in Fort Wayne, Indiana, with her family.
Loading...
or
Not Currently Available for Direct Purchase