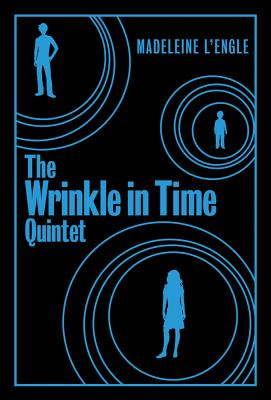 After Meg and Charles Wallace Murry and Calvin O'Keefe defeated evil and saved the universe in the Newbery Medal-winning classic A Wrinkle in Time, their adventures didn't end. The other books in the Wrinkle in Time Quintet take readers to the deep past and distant future, to the far reaches of the galaxy and the inner workings of the human heart. A beautiful hardcover gift edition, complete with blue gilded pages and a slipcase, brings together the stories of A Wrinkle in Time, A Wind in the Door, A Swiftly Tilting Planet, Many Waters, and An Acceptable Time for true fans of this iconic series.

“A book that every young person should read, a book that provides a road map for seeking knowledge and compassion even at the worst of times, a book to make the world a better place.” —Cory Doctorow on A Wrinkle in Time

“A suspenseful, life-and-death drama that is of believable cosmic significance. Complex and rich in mystical religious insights, this is breathtaking entertainment.” —School Library Journal, starred review on A Wind in the Door

“Madeleine L'Engle mixes classical theology, contemporary family life, and futuristic science fiction to make a completely convincing tale that should put under its spell both readers familiar with the Murrys and those meeting them for the first time.” —The New York Times Book Review on A Wind in the Door

“An intricately woven fantasy ... Theme is L'Engle's greatest forte, and once again she proves this with a compelling plot, rich in style that vibrates with provocative thoughts on universal love, individual caring, and the need for the joy in living.” —Booklist, starred review on A Swiftly Tilting Planet

Madeleine L'Engle (1918-2007) was the Newbery Medal-winning author of more than 60 books, including the much-loved A Wrinkle in Time. Born in 1918, L'Engle grew up in New York City, Switzerland, South Carolina and Massachusetts. Her father was a reporter and her mother had studied to be a pianist, and their house was always full of musicians and theater people. L'Engle graduated cum laude from Smith College, then returned to New York to work in the theater. While touring with a play, she wrote her first book, The Small Rain, originally published in 1945. She met her future husband, Hugh Franklin, when they both appeared in The Cherry Orchard. Upon becoming Mrs. Franklin, L'Engle gave up the stage in favor of the typewriter. In the years her three children were growing up, she wrote four more novels. Hugh Franklin temporarily retired from the theater, and the family moved to western Connecticut and for ten years ran a general store. Her book Meet the Austins, an American Library Association Notable Children's Book of 1960, was based on this experience. Her science fantasy classic A Wrinkle in Time was awarded the 1963 Newbery Medal. Two companion novels, A Wind in the Door and A Swiftly Tilting Planet (a Newbery Honor book), complete what has come to be known as The Time Trilogy, a series that continues to grow in popularity with a new generation of readers. Her 1980 book A Ring of Endless Light won the Newbery Honor. L'Engle passed away in 2007 in Litchfield, Connecticut.
Loading...
or
Not Currently Available for Direct Purchase