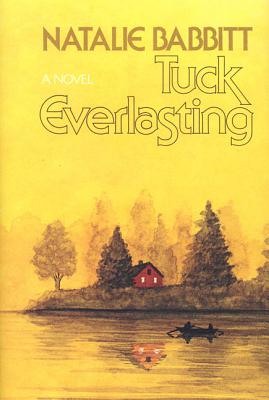 Doomed to - or blessed with - eternal life after drinking from a magic spring, the Tuck family wanders about trying to live as inconspicuously and comfortably as they can. When ten-year-old Winnie Foster stumbles on their secret, the Tucks take her home and explain why living forever at one age is less a blessing that it might seem. Complications arise when Winnie is followed by a starnger who wants to market the spring water for a fortune.

"Rarely does one find a book with such prose. Flawless in both style and structure, it is rich in imagery and punctuated with light fillips of humor. The author manipulates her plot deftly, dealing with six main characters brought together because of a spring whose waters can bestow everlasting life...Underlying the drama is the dilemma of the age-old desire for perpetual youth." --The Horn Book

Artist and writer Natalie Babbitt (1932-2016) is the award-winning author of the modern classic Tuck Everlasting, The Eyes of the Amaryllis, Kneeknock Rise and many other brilliantly original books for young people. She began her career in 1966 as the illustrator of The Forty-ninth Magician, written by her husband. When her husband became a college president and no longer had time to collaborate, Babbitt tried her hand at writing. Her first novel, The Search for Delicious, established her gift for writing magical tales with profound meaning. Kneeknock Rise earned her a Newbery Honor Medal, and in 2002, Tuck Everlasting was adapted into a major motion picture. Natalie Babbitt lived in Hamden, CT.
Loading...
or
Not Currently Available for Direct Purchase