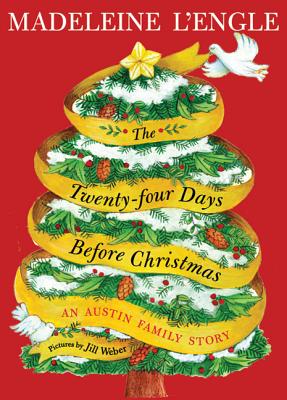 The Twenty-four Days Before Christmas

Vicky Austin's family does one special thing each day of December to prepare for Christmas. This year, they're also preparing for the birth of a new brother or sister, due after the New Year. Vicky is worried that the baby will come early—what kind of Christmas Eve would it be without Mother to help them hang up stockings and sing everyone to sleep with carols? This classic story of an old-fashioned Christmas is accompanied by merry illustrations by Jill Weber.


Praise For The Twenty-four Days Before Christmas: An Austin Family Story…

“This new edition of a story first published in 1984 includes unobtrusive spot illustrations done in an inviting folk-art style; readers will feel as though they're glimpsing the Austins' very own well-loved ornaments and other holiday memorabilia. Compact trim size further highlights the coziness of the family drama.” —Horn Book Magazine

I have always loved illustrating books, deciding what the scenery, the costumes, and the characters all look like. And I really do love book design, the millions of typefaces, and bringing order to it all. My favorite projects are when I get to wear both hats.

After attending Rhode Island School of Design, I moved to New York City and landed my first job as an apprentice at a small animation studio where I worked on a few segments of Sesame Street. My next job was in publishing, where I decided books were my true love. I had two staff positions in the art department of T. Y. Crowell, where I worked on children’s books, adult trade, and college books—a great learning opportunity. My last staff job was as assistant to the art director at Simon & Schuster, and from there I struck out on my own as a freelance designer and illustrator.

Many years ago, I moved with my husband from SoHo, before it got so chic, to the woods of New Hampshire, where we still grow our own food in the summer and keep warm by the woodstove in the winter.