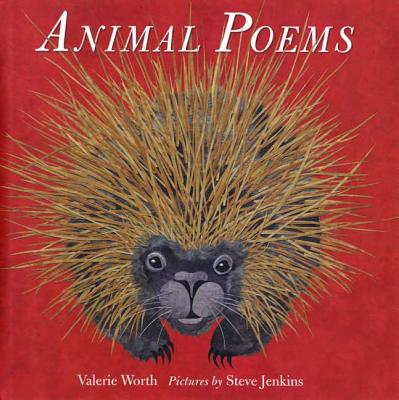 By Steve Jenkins (Illustrator), Valerie Worth

"Ms. Worth brilliantly employs all aspects of the poet's craft." – The New York Times Book Review

Each of the exquisite twenty-three poems in this posthumous collection by Valerie Worth carefully distinguishes one animal from all other creatures and captures it in all of its wonderful singularity – from wasp to snake to wren. The way Worth perfectly illuminates the uniqueness of each animal in her precise and elegant free verse will delight both fans of her celebrated Small Poems and readers encountering her poetry for the first time.

Breathtakingly rich cut-paper illustrations by Steve Jenkins provide a perfect counterpoint to Worth's spare style, and together poetry and picture bring every animal vividly to life.

Animal Poems is a 2008 Bank Street - Best Children's Book of the Year.

STEVE JENKINS has written and illustrated many picture books, including Actual Size and the Caldecott Honor Book What Do You Do with a Tail Like This? He lives in Boulder, Colorado.

“This stunning collection will encourage readers to become careful observers, and to make the world of nature their own.” —Starred, Publishers Weekly

“Vivid imagery and an expert command of sound and meter distinguish this collection of poems about animals.” —Starred, Booklist

“Will resonate with poetry lovers, but should also open doors for those who feel daunted by poetry.” —Starred, School Library Journal, April 2007

“The works of Valerie Worth stand out as quiet portraits capturing the essence of the most ordinary subjects.” —Book Links, March 2007

“The cut-paper illustrations are as rich in detail and color as the poetry they accompany.” —Kiwi Magazine