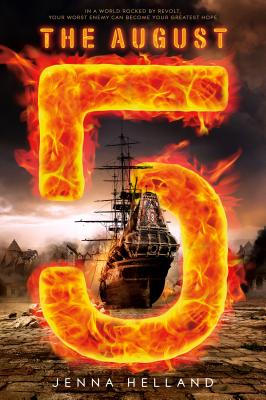 In a world rocked by revolt, your worst enemy can become your greatest hope

Fourteen-year-old Tommy Shore lives a life of privilege: he has the finest clothing, food, and education available and servants to take care of his every whim. He is the son of the chief administrator of Aeren-the most important man on the islands. Fifteen-year-old Tamsin Henry has grown up knowing only poverty, but she is the daughter of a revolutionary who longs to give her and their people more.
Ordinarily, Tommy and Tamsin would never cross paths, but on the day of a violent and deadly revolt, chance brings them together. Now the world waits to hear the fate of the August 5, five men led by, and including, Tamsin's father and captured during the uprising. As tensions between the government and the rebels escalate, Tommy uncovers a brutal truth about his father. How will he ever get Tamsin to trust that he wants to help her cause, when she believes he stands for everything she's fighting against?


Praise For The August 5…

"The August 5 is told in alternating perspectives, which allows readers to see the society from both sides. Excerpts from Cottager and Zunft newspapers at the beginning of chapters further add to the world-building...Recommend this to teens who like political thrillers." —VOYA

Jenna Helland is a game designer. She was born in Columbia, Missouri, and worked as a journalist before moving to the Pacific Northwest with her family. The August 5 is her first novel.
Loading...
or
Not Currently Available for Direct Purchase