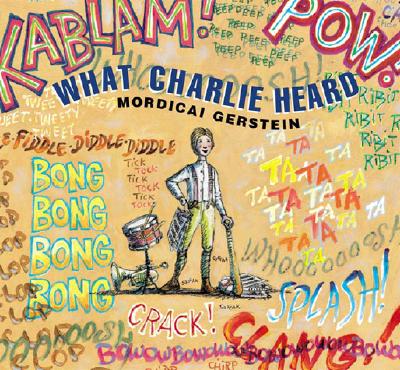 The extraordinary story of the composer Charles Ives.

"Sometimes little Charlie lay in his crib just listening. He heard
his mother’s long dress as she moved around his room. He heard big clocks and little clocks. He heard wagons and horse hooves. He heard dogs and crickets and the church bell next door."

Charlie listened all through his boyhood, and as he grew into a man, he found he wanted to re-create in music the sounds that he heard every day. But others couldn’t hear what Charlie heard. They didn’t hear it as music – only as noise. In this daring and original book, Mordicai Gerstein graphically translates the audible into the visible – filling his pictures with noise – to tell the story of Charles Ives (1874–1954), a great musical innovator who let neither criticism nor public scorn keep him from composing music that expressed all that he heard in the world. He was finally recognized with a Pulitzer Prize in 1947. What Charlie Heard is a 2003 Bank Street - Best Children's Book of the Year.


Praise For What Charlie Heard…

Mordicai Gerstein is the author and illustrator of "The Man Who Walked Between the Towers," winner of the Caldecott Medal, and has had four books named "New York Times" Best Illustrated Books of the Year. Gerstein was born in Los Angeles in 1935. He remembers being inspired as a child by images of fine art, which his mother cut out of "Life" magazine, and by children's books from the library: "I looked at Rembrandt and Superman, Matisse and Bugs Bunny, and began to make my own pictures." He attended Chouinard Art Institute in Los Angeles, and then got a job in an animated cartoon studio that sent him to New York, where he designed characters and thought up ideas for TV commercials. When a writer named Elizabeth Levy asked him to illustrate a humorous mystery story about two girls and a dog, his book career began, and soon he moved on to writing as well as illustrating. "I'm still surprised to be an author," he says. "I wonder what I'll write next?" Gerstein lives in Westhampton, Massachusetts.
Loading...
or
Not Currently Available for Direct Purchase