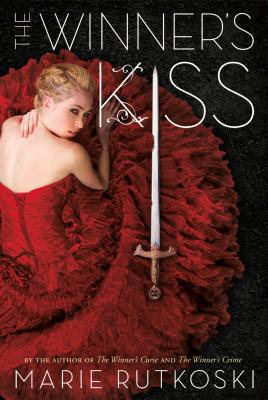 War has begun. Arin is in the thick of it with untrustworthy new allies and the empire as his enemy. Though he has convinced himself that he no longer loves Kestrel, Arin hasn’t forgotten her, or how she became exactly the kind of person he has always despised. She cared more for the empire than she did for the lives of innocent people—and certainly more than she did for him.

At least, that’s what he thinks.

In the frozen north, Kestrel is a prisoner in a brutal work camp. As she searches desperately for a way to escape, she wishes Arin could know what she sacrificed for him. She wishes she could make the empire pay for what they’ve done to her.

But no one gets what they want just by wishing.

As the war intensifies, both Kestrel and Arin discover that the world is changing. The East is pitted against the West, and they are caught in between. With so much to lose, can anybody really win?

“Rutkoski delivers the conclusion to this trilogy with aplomb and grace . . . The heart of this story, however, has always been Arin and Kestrel’s complicated love for each other, and here their once-sizzling chemistry is replaced with real affection and attempts to truly know each another, though fans can rest assured there are still plenty of passionate encounters in this satisfying conclusion.” —The Bulletin for the Center of Children's Books

Born in Illinois, Marie Rutkoski is a graduate of the University of Iowa and Harvard University. She is a professor of English literature at Brooklyn College and a New York Times bestselling author of books for children and young adults. She lives in Brooklyn with her family.
Loading...
or
Not Currently Available for Direct Purchase