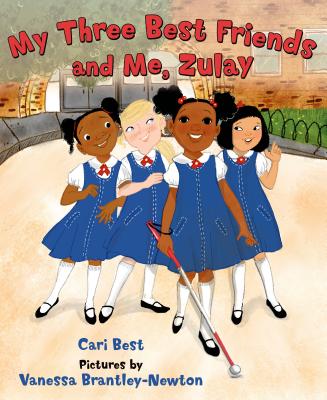 My Three Best Friends and Me, Zulay (Hardcover)

Zulay and her three best friends are all in the same first grade class and study the same things, even though Zulay is blind. When their teacher asks her students what activity they want to do on Field Day, Zulay surprises everyone when she says she wants to run a race. With the help of a special aide and the support of her friends, Zulay does just that.

Vanessa Brantley-Newton is the writer and/or illustrator of many picture books, including One Love, based on the Bob Marley song. Ms. Newton lives in Charlotte, North Carolina.

Praise For My Three Best Friends and Me, Zulay…

“This picture book is a great way to continue building diverse library collections for all readers.” —School Library Journal

“Best's prose and Brantley-Newton's digital images exude warmth and empathy as they build to a triumphant conclusion that has Zulay working hard to prepare for a Field Day race.” —Publishers Weekly

“Zulay's voice shines with rhythm and sensory detail, immersing readers naturally in her experience. Zulay's mention of learning to read braille, swim and climb trees despite difficulty will reassure blind kids whose hands are also "learn[ing] the way," and all kids will cheer as she and Ms. Turner fly around the track. A slightly raised braille alphabet on the back cover is a nice touch. Blind and sighted kids alike will enjoy this cheery outing, which appropriately treats learning to use a white cane with the straightforwardness another might treat learning to ride a bike.” —Kirkus Reviews, starred

“Refreshing in its casual approach to racial diversity....Friends reflect an array of skin colors and ethnicities. Vanessa Brantley-Newton's wonderfully spirited illustrations find the subtler commonalities between them all, as they mirror one another in their expressions and body language. Best's rendering of the cheerful inclusiveness in Zulay's classroom toward a child with a disability is equally exciting.” —The New York Times