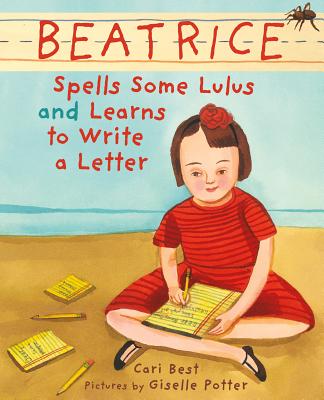 Beatrice Spells Some Lulus and Learns to Write a Letter

Beatrice wants to write the kind of letters that start with "Dear Somebody," but she only knows how to write letters like A B C T E R I E. Then her Nanny Hannah teaches her how to put the letters together to spell words, and Beatrice takes off on a spelling spree. She decides to start a Spelling Club at school, but no one signs up because spelling is B-O-R-I-N-G. In fact, the class decides to go on a spelling strike! Then Beatrice has a lulu of an idea and turns show-and-tell into show-and-spell starring her pet T-A-R-A-N-T-U-L-A—and soon, in this picture book by Cari Best, everyone has caught the spelling bug.

“Beatrice, whose own name is a bit of a L-U-L-U, is totally charming, and the story and artwork are a P-E-R-F-E-C-T M-A-T-C-H.” —Kirkus Reviews, starred review

“*This.. picture book will introduce children not only to the joys of spelling but also to words like "lulu" and "crackerjack." Potter's folk-arty illustrations depict the story's action and emotion well...This book will find a ready audience among the spelling crowd and might encourage others to join them.” —School Library Journal, starred review

Giselle Potter has collaborated with Cari Best on books including Beatrice Spells Some Lulus and Learns to Write a Letter and Three Cheers for Catherine the Great!, which was a Booklist Editors' Choice and selected a Best Book of the Year by both Publishers Weekly and Child magazine. Ms. Potter lives in Kingston, New York.
Loading...
or
Not Currently Available for Direct Purchase