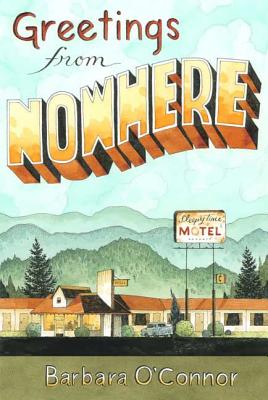 Aggie isn't expecting visitors at the Sleepy Time Motel in the Great Smoky Mountains. Since her husband died, she is all alone with her cat, Ugly, and keeping up with the bills and repairs has become next to impossible. The pool is empty, the garden is overgrown, and not a soul has come to stay in nearly three months. When she reluctantly places a For Sale ad in the newspaper, Aggie doesn't know that Kirby and his mom will need a room when their car breaks down on the way to Kirby's new reform school. Or that Loretta and her parents will arrive in her dad's plumbing company van on a trip meant to honor the memory of Loretta's birth mother. Or that Clyde Dover will answer the For Sale ad in such a hurry and move in with his daughter, Willow, looking for a brand-new life to replace the one that was fractured when Willow's mom left. Perhaps the biggest surprise of all is that Aggie and her guests find just the friends they need at the shabby motel in the middle of nowhere.

From an author long recognized for her true Southern voice and heartfelt characters, Greetings from Nowhere, with its four intertwining stories, brings Barbara O'Connor's work to a new level of sophistication.

Barbara O’Connor is the author of numerous acclaimed books for children, including Fame and Glory in Freedom, Georgia, How to Steal a Dog, The Small Adventure of Popeye and Elvis, and The Fantastic Secret of Owen Jester. She has been awarded the Parents’ Choice Gold and Silver Awards, the Massachusetts Book Award, the Kansas William Allen White Award, the South Carolina Children's Book Award, the Indiana Young Hoosier Award, the South Dakota Children's Book Award, and the Dolly Gray Award, among many honors. As a child, she loved dogs, salamanders, tap dancing, school, and even homework. Her favorite days were when the bookmobile came to town. She was born and raised in Greenville, South Carolina, and now lives in Asheville, North Carolina.

Praise For Greetings from Nowhere…

“Delivers a story that sparkles. . . . Readers will come to realize that everyone has something worth paying attention to, if you dig deep enough.” —Christian Science Monitor

“Another satisfying novel with a southern setting . . .The plainspoken text is clean, direct, and honest in its portrayal of pain and hope.” —Booklist

“O'Connor carefully weaves together the hopes, fears, disappointments, sorrows and joys of her multi-generational cast to produce a warm and satisfying conclusion.” —Kirkus Reviews

“O'Connor fans...won't be disappointed.” —Bulletin of the Center for Children's Books

“O'Connor's knack for well-developed characters and feisty protagonists is evident, as is her signature Southern charm.” —School Library Journal