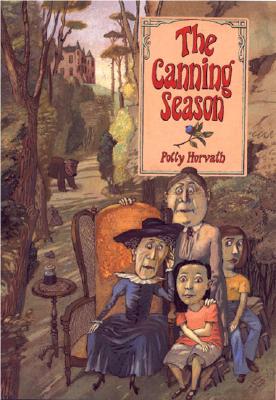 One night out of the blue, Ratchet Clark’s ill-natured mother tells her that Ratchet will be leaving their Pensacola apartment momentarily to take the train up north. There she will spend the summer with her aged relatives Penpen and Tilly, inseparable twins who couldn’t look more different from each other. Staying at their secluded house, Ratchet is treated to a passel of strange family history and local lore, along with heaps of generosity and care that she has never experienced before. Also, Penpen has recently espoused a new philosophy – whatever shows up on your doorstep you have to let in. Through thick wilderness, down forgotten, bear-ridden roads, come a variety of characters, drawn to Penpen and Tilly’s open door. It is with vast reservations that the cautious Tilly allows these unwelcome guests in. But it turns out that unwelcome guests may bring the greatest gifts.

By turns dark and humorous, Polly Horvath offers adolescent readers enough quirky characters and outrageous situations to leave them reeling! The Canning Season is the winner of the 2003 National Book Award for Young People's Literature.

Praise For The Canning Season…

"Horvath tops even Everything on a Waffle with this hilarious, heartrending tale of two unwanted children left with a pair of eccentric old ladies. . . Once again Horvath displays a genius for creating multigenerational, interestingly extended families, and for blending high and low comedy into a tale rife with important themes and life-changing events." --Starred, Kirkus Reviews
"Readers are in for a wise and wacky ride." --Starred, School Library Journal
"Alternately dark and humorous, Polly Horvath's imagination is always a treat." --The Chicago Tribune
"Unruly, unpredictable and utterly compelling...Readers may find themselves wondering just how far Horvath will go with her uncensored, Mad Hatter humor - and they won't be disappointed with her steering." --Starred, Publishers Weekly

Polly Horvath is the author of many books for young people, including "Everything on a Waffle," "The Pepins and Their Problems," and "The Trolls." Her numerous awards include the Newbery Honor, the National Book Award for Young People's Literature, the Boston Globe-Horn Book Honor, the Vicky Metcalf Award for Children's Literature, the Mr. Christie Award, the international White Raven, and the Young Adult Canadian Book of the Year. Horvath grew up in Kalamazoo, Michigan. She attended the Canadian College of Dance in Toronto and the Martha Graham School of Contemporary Dance in New York City. She has taught ballet, waitressed, done temporary typing, and tended babies, but while doing these things she has always also written. Now that her children are in school, she spends the whole day writing, unless she sneaks out to buy groceries, lured away from her desk by the thought of fresh Cheez Whiz. She lives on Vancouver Island with her husband and two daughters.
Loading...
or
Not Currently Available for Direct Purchase