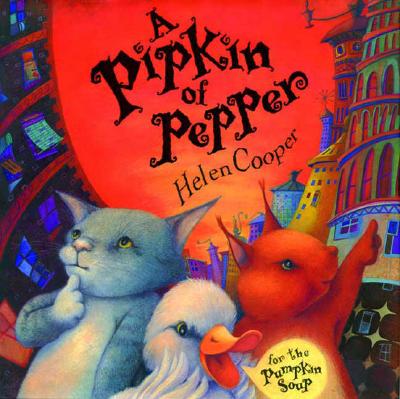 A Pipkin of Pepper

A companion to the best-selling "Pumpkin Soup"
""Duck, Cat, and Squirrel, the three animal friends from Pumpkin Soup, are out of salt, a key ingredient of their special recipe. Duck insists upon coming along with Cat and Squirrel on the shopping trip to the city. It's his first visit, and he's a little scared, but he forgets everything when he spots a pepper store. What if they bought a pipkin of pepper to add to the soup? When he turns around to tell Cat and Squirrel about his great idea, he realizes they're gone
This perfect book about getting lost, with the sage reminder to stay put if you do, is illustrated with warm, cleverly detailed paintings.
"A Pipkin of Pepper" is a 2006 Bank Street - Best Children's Book of the Year.

Helen Cooper was born in London in 1963. When she was two, she moved to a country town in Cumbria, in the north of England, where people collected their milk in cans from the farm, and fairies seemed to lurk in the wildflowers outside. It rained a lot and there weren't enough kids to play with, but there were compensations: beautiful countryside, horses, and lots of time to write stories, draw pictures, play the piano, and read. When she grew up, Helen trained as a music teacher because that seemed sensible. Then she played in a band, and got a day job painting posh china animals to make ends meet. In the evenings, she taught herself to illustrate. Her first book was published in 1987, and since then she has written and illustrated many books for children, including "The Bear Under the Stairs," "Dog Biscuit," "Delicious!" and "Pumpkin Soup," winner of the Kate Greenaway Medal and short-listed for the Kurt Maschler Award. Helen lives with her husband, Ted Dewan, who also writes and illustrates books. They live in Oxford, England, with their daughter, Pandora.
Loading...
or
Not Currently Available for Direct Purchase