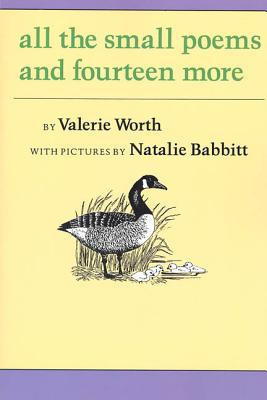 All the Small Poems and Fourteen More

All the Small Poems and Fourteen More gathers all four of Valerie Worth’s small poetry children’s books and includes the original illustrations by Natalie Babbitt, the award-winning writer/artist of Tuck Everlasting.

Inspired by her love of nature, Valerie Worth’s wondrous verse about animals, plants, and other everyday objects presents a perfect perspective of the world through a child’s eyes.


Praise For All the Small Poems and Fourteen More…

“Every bit as worth as their predecessors.” —The Horn Book

“A virtual catalog of brief meditations on little earthly wonders-from "Amoeba" to "Zinnias"-rendered in characteristically simple yet exquisitely language and though.” —Voice of Youth Advocates

“Ms. Worth brilliantly employs all aspects of the poet's craft...Like haiku, her poems are written in the present tense of one thing keenly observed, inviting readers to complete the picture.” —Myra Cohn Livingston, The New York Times Book Review

“All the original collaborations between this poet and artist are collected in this volume, which includes ninety-nine poems and an additional fourteen new ones. The early works have been widely praised, for good reason, and the new verses are every bit as worthy as their predecessors...the book is a gift to cherish.” —The Horn Book

Artist and writer Natalie Babbitt (1932–2016) is the award-winning author of the modern classic Tuck Everlasting and many other brilliantly original books for young people. As the mother of three small children, she began her career in 1966 by illustrating The Forty-Ninth Magician, written by her husband, Samuel Babbitt. She soon tried her own hand at writing, publishing two picture books in verse. Her first novel, The Search for Delicious, was published in 1969 and established her reputation for creating magical tales with profound meaning. Kneeknock Rise earned Babbitt a Newbery Honor in 1971, and she went on to write—and often illustrate—many more picture books, story collections, and novels. She also illustrated the five volumes in the Small Poems series by Valerie Worth. In 2002, Tuck Everlasting was adapted into a major motion picture, and in 2016 a musical version premiered on Broadway. Born and raised in Ohio, Natalie Babbitt lived her adult life in the Northeast.
Loading...
or support indie stores by buying on