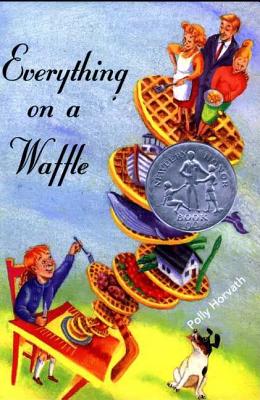 A Newbery Honor Book By the author of The Trolls, a National Book Award Finalist.

My name is Primrose Squarp. I am eleven years old. I have hair the color of carrots in apricot glaze (recipe to follow), skin fair and clear where it isn't freckled, and eyes like summer storms.

Readers will know right from the start that the narrator of Everything on a Waffle is going to tell her story straight and pull no punches. Primrose's parents have been lost at sea, but she believes without an iota of doubt that they are still alive, somewhere. She moves in with her Uncle Jack, but feels generally friendless. Her only real refuge is a local restaurant called The Girl on the Red Swing, where the owner, Miss Bowzer, serves everything on waffles -- except advice and good sense, which come free of charge and are always reliable.

Food in general plays an important role in Primrose's journey toward peace and understanding (a recipe dictated in her unmistakable voice is appended to each chapter), and readers will eagerly cheer her on through this funny, bittersweet novel.

Praise For Everything on a Waffle…

"In [Polly Horvath's] capable hands the dilemma of Primrose Squarp is revealed with hilarity and buoyant good nature . . . Subtlety and slapstick is a challenging combination; Horvath pulls it off beautifully."-- Starred, The Horn Book

"The story is full of subtle humor and wisdom, presented through the eyes of a uniquely appealing young protagonist."-- School Library Journal