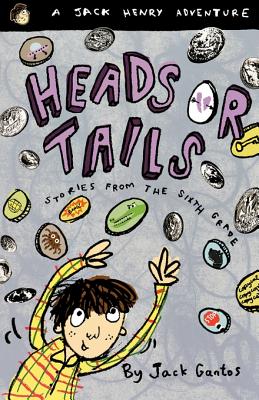 Jack's life is a crazy roller-coaster ride. At his fifth school in six years, he has a crackpot teacher who won't give him a break about his lousy handwriting and a secret crush who wants to be a policewoman. At home, he has a pesky little brother with a knack for getting hurt whenever Jack's supposed to be looking after him, a terror for an older sister, all sorts of weird neighbors, and, last but not least, ferocious alligators in the canal behind his house.

Writing in his diary about his good days and bad days is one way Jack survives his up-and-down year. But he's also a kid who knows that life can go any which way at any given moment.


Praise For Heads or Tails: Stories from the Sixth Grade (Jack Henry #3)…

“Laugh-out-loud funny . . . The author has bull's-eye accuracy in capturing the private torments of a twelve-year-old.” —The Buffalo News

“As real as it gets.” —The Book Report

“The author of the offbeat Rotten Ralph picture books makes an auspicious foray into new ground with this semi-autobiographical, wholly engaging novel. His narrator, Jack, travels through the often poignant moments that highlight his sixth-grade year.” —Starred, Publishers Weekly

“Jack's a survivor, an ‘everyboy' whose world may be wacko but whose heart and spirit are eminently sane . . . Gantos is a terrific writer with a wonderfully wry sensibility.” —Starred, School Library Journal