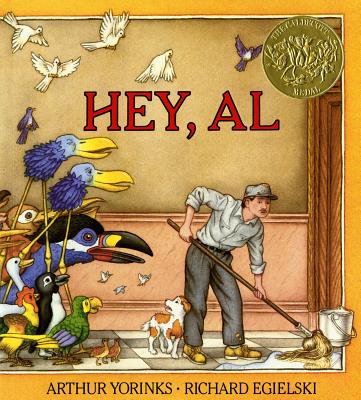 Al, a janitor, and his faithful dog, Eddie, live in a single room on the West Side. They eat together, they work together, they do everything together. So what's the problem?

Thier room is crowded and cramped; their life is an endless struggle. Al and Eddie are practically at eachothers throats when a large and mysterious bird offers them a new life in paradise. After some debate, they decide to accept.

Transported to a gorgeous island in the sky, Al and Eddie are soon living a life of ease and luxury. But they come to find that the grass can be a little too green on the other side. After a dramatic, nearly tragic escape from their paradise prison, both man and dog agree: there really is no place like home.

Hey, Al is the winner of the 1987 Caldecott Medal.

Arthur Yorinks has written and directed for opera, theater, dance, film, and radio and is the author of over thirty-five acclaimed and award-winning books, including Hey, Al, a children’s book, which earned the Caldecott Medal in 1987. From the age of 6, Yorinks studied to be a classical pianist, under former Juilliard professor Robert Bedford. At 17, veering from a potential profession as a classical musician, Yorinks began over four decades of writing and working in the performing arts. In the field of opera, Yorinks was Philip Glass’s librettist for the operas The Juniper Tree and The Fall of the House of Usher.

Through his forty years of picture-book making, he has teamed up with many famed illustrators including Maurice Sendak, William Steig, Mort Drucker, David Small, and Richard Egielski. His book, Mommy?, was a New York Times bestseller. Mr. Yorinks lives in New York City and continues to write and direct.

“Like Maurice Sendak's Where the Wild Things Are, this picture book explores the pleasures and the costs of leaving home. . .Hey, Al is a perfect melding of words and pictures, fantasy and reality, tenderness and humor.” —Judith Viorst, The New York Times Book Review

“Outstanding artwork. . .The author and artist succeed again, with a book that has something for everyone.” —Starred, Booklist