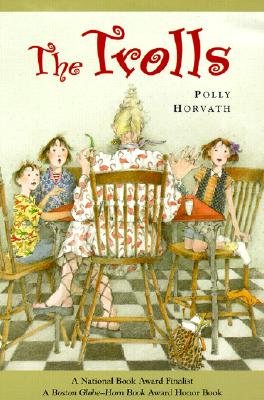 Laugh-out-loud stories within a story

Aunt Sally is beyond any of Melissa, Amanda, and Pee Wee's expectations. She has come all the way from Vancouver Island, Canada, to take care of the children while their parents are away, and right from the start Aunt Sally enchants them with tales of her childhood with their father. Odd characters figure largely in the stories, like Maud, a hunter rumored to have killed eighty cougars; Great-uncle Louis, a health nut who insists everyone should gnaw on sticks for extra fiber; and Fat Little Mean Girl, the star of a cautionary tale involving witchcraft and candy. All of Aunt Sally's reminiscences lead up to a crucial story about trolls, sinister creatures who supposedly lurked along the shore at night. The trolls had the power to change Aunt Sally's life forever, and their legacy may change the lives of the three present-day children as well.


Praise For The Trolls…

"An unconventional aunt blows in from Vancouver to pinch-hit as babysitter, and offers two sisters and their brother an entrancing view of family history...Most sections are...hilarious, as is the snappy and perfectly timed dialogue. After the last laugh, Aunt Sally's hard-won understanding of human nature will leave readers with plenty to ponder."-Kirkus Reviews.