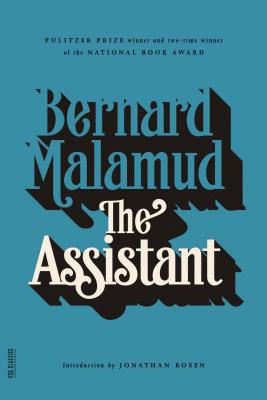 The Assistant, Bernard Malamud's second novel, originally published in 1957, is the story of Morris Bober, a grocer in postwar Brooklyn, who "wants better" for himself and his family. First two robbers appear and hold him up; then things take a turn for the better when broken-nosed Frank Alpine becomes his assistant. But there are complications: Frank, whose reaction to Jews is ambivalent, falls in love with Helen Bober; at the same time he begins to steal from the store.

Like Malamud's best stories, this novel unerringly evokes an immigrant world of cramped circumstances and great expectations. Malamud defined the immigrant experience in a way that has proven vital for several generations of writers.

"His best novel . . . The Assistant is as tightly written as a prose poem." --Morris Dickstein in Leopards in the Temple: The Transformation of American Fiction 1945-1970


Praise For The Assistant: A Novel (FSG Classics)…

“The clarity and concreteness of [Malamud's] style, the warm humanity over his people, the tender wit that keeps them first and compassionable, will delight many.... Mr. Malamud's people are memorable and real as rock.” —William Goyen, The New York Times

"There is a binding theme throughout the book, a search for fundamental truths through the study of ordinary people, their everyday ups and downs, their mundane pleasures and pains ... Malamud's vision, style and world are distinctively original." -- San Francisco Chronicle

Jonathan Rosen is the author of The Talmud and the Internet and the novels Eve's Apple and Joy Comes in the Morning. His essays have appeared in The New York Times and The New Yorker. He is the editorial director of Nextbook.
Loading...
or support indie stores by buying on