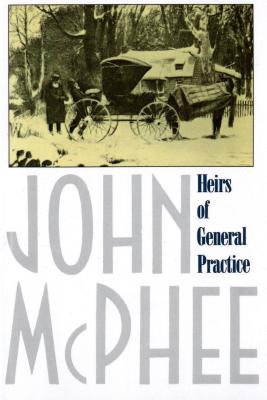 Heirs of General Practice is a frieze of glimpses of young doctors with patients of every age—about a dozen physicians in all, who belong to the new medical specialty called family practice. They are people who have addressed themselves to a need for a unifying generalism in a world that has become greatly subdivided by specialization, physicians who work with the "unquantifiable idea that a doctor who treats your grandmother, your father, your niece, and your daughter will be more adroit in treating you."

These young men and women are seen in their examining rooms in various rural communities in Maine, but Maine is only the example. Their medical objectives, their successes, the professional obstacles they do and do not overcome are representative of any place family practitioners are working. While essential medical background is provided, McPhee's masterful approach to a trend significant to all of us is replete with affecting, and often amusing, stories about both doctors and their charges.


Praise For Heirs of General Practice…

“Using the case method so familiar to doctors, John McPhee has captured the essence of the struggle within medicine to find a better balance between humane interest in patients as persons and the scientific rigor demanded by modern medicine. His portraits of young family doctors in Maine vividly portray the struggle of primary care to achieve this balance.” —Robert S. Lawrence, M.D., Charles S. Davidson Associate Professor of Medicine Harvard Medical School

“A sensitive portrayal of the heart of family medicine--the personal relationships between family physicians, their patients and families--and an accurate representation of the special challenges of family practice and the reasons for its recent renaissance.” —John P. Geyman, M.D., chairman, Department of Family Medicine, University of Washington and editor, Journal of Family Practice