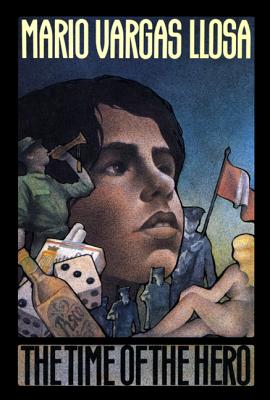 The Time of the Hero (Paperback)

The action of The Time of the Hero, Nobel Prize-winning author Mario Vargas Llosa's first novel, takes place at the Leoncio Prado Military Academy in Lima, Peru. There, four angry cadets who have formed an inner circle in an attempt to ward off the boredom and stifling confinement of the military academy set off a chain of events that starts with a theft and leads to murder and suicide. The Time of the Hero presents, with great accuracy and power, the cadets' nightmare life: brutal initiation rights, poker in the latrines, drinking contests; and, above all else, the strange military code which, whether broken or followed, can only destroy.

When The Time of the Hero was first published in Peru in 1962, it was considered so scandalous that a thousand copies were burned in an official ceremony at the Leoncio Prado Military Academy. That same year, the book received the Biblioteca Breve Prize, an award given to the best work of fiction in the Spanish language.

"…[A]s with other fine writers, Vargas functions on more than a single level of meaning." - The New York Times

Mario Vargas Llosa is Peru's foremost author and the winner of the 2010 Nobel Prize in Literature. In 1994 he was awarded the Cervantes Prize, the Spanish-speaking world's most distinguished literary honor, and in 1995 he won the Jerusalem Prize. His many distinguished works include The Storyteller, The Feast of the Goat, Aunt Julia and the Scriptwriter, Death in the Andes, In Praise of the Stepmother, The Bad Girl, Conversation in the Cathedral, The Way to Paradise, and The War of the End of the World. He lives in London.
or
Buy Here
Copyright © 2020 American Booksellers Association