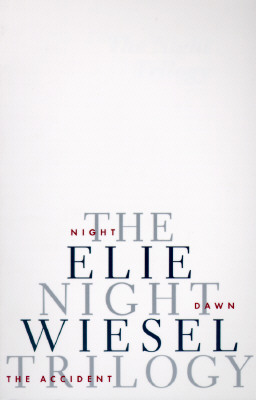 Night, Dawn, and the Accident

Night is one of the masterpieces of Holocaust literature. First published in 1960, it is the autobiographical account of an adolescent boy and his father in Auschwitz. Wiesel writes of their battle for survival, and of his battle with God for a way to understand the wanton cruelty he witnesses each day.

In the short novel Dawn (1961), a young man who has survived the Second World War and settled in Palestine is apprenticed to a Jewish terrorist gang. Command to execute a British officer who has been taken hostage, the former victim becomes an executioner.

In The Accident, (1962), Wiesel again turns to fiction to question the limits of the spirit and the self: Can Holocaust survivors forge a new life without the memories of the old? As the author writes in his introduction, "In Night it is the 'I' who speaks; in the other two [narratives], it is the 'I' who listens and questions."

Wiesel's trilogy offers meditations on mankind's attraction to violence and on temptation of self-destruction.

A Hill & Wang Teacher's Guide is available for this title.

Praise For The Night Trilogy: Night, Dawn, and the Accident…

"To the best of my knowledge no one has left behind him so moving a record."--Alfred Kazin

"Wiesel has taken his own anguish and imaginatively metamorphosed it into art."--Curt Leviant, Saturday Review

Elie Wiesel, the author of some twenty books, is Andrew W. Mellon Professor in Humanities at Boston University. He and his family live in New York City. He was awarded the Nobel Peace Prize in 1986
Loading...
or
Not Currently Available for Direct Purchase