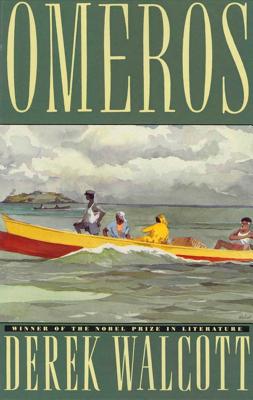 A poem in five books, of circular narrative design, titled with the Greek name for Homer, which simultaneously charts two currents of history: the visible history charted in events -- the tribal losses of the American Indian, the tragedy of African enslavement -- and the interior, unwritten epic fashioned from the suffering of the individual in exile.

“No poet rivals Mr. Walcott in humor, emotional depth, lavish inventiveness in language, or the ability to express the thoughts of his characters and compel the reader to follow the swift mutations of ideas and images in their minds. This wonderful story moves in a spiral, replicating human thought, and in the end, surprisingly, it makes us realize that history, all of it, belongs to us.” —Mary Lefkowitz, The New York Times Book Review (an Editors' Choice/Best Book of 1990 selection)

“Characters come fully and movingly to life in Walcott's hands; black and white are treated with equal understanding and sympathy as they go their complicated ways . . . Wit and verbal play . . . enliven every page of this extraordinary poem . . . A constant source of surprise and delight from stanza to stanza, a music so subtle, so varied, so exquisitely right that it never once, in more than eight thousand lines, strikes a false note.” —Bernard Knox, The New York Review of Books

“One of the great poems of our time.” —John Lucas, New Statesman and Society