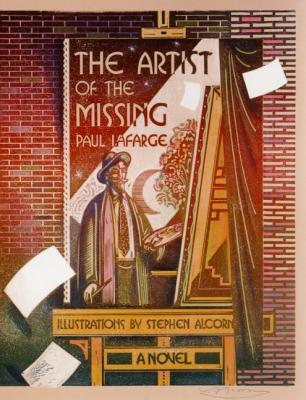 The Artist of the Missing

Frank, a young artist, arrives in the city hoping to unravel the mystery of his parents' disappearance. He begins working as a washer of robes at a hotel for itinerant judges. There he meets and falls in love with Prudence, a forensic photographer whose pictures reveal the secrets of the dead.

When Prudence disappears, Frank sets out in search of her, a quest that leads him into the shadowy world of a revolutionary salon, then to prison, and finally to discover the city's strange secrets and the secrets of his own heart.

A haunting novel, The Artist of the Missing is a stunning debut, both a richly imagined evocation of another world and a piercing examination of the mystery of love, and beautifully illustrated by the acclaimed artist Stephen Alcorn.

A visionary novel about love, loss, imagination, and despair.


Praise For The Artist of the Missing: A Novel…

“An exuberant tale full of wonders conceived by a young writer with a dazzling command of language and an imagination that brings to mind the otherworlds of Kafka, Swift, and Frank Baum. There is no escapism, for while the trials of his hero are enchanting, they reflect real fears of a present in which connections are fleeting, memory devalued, love a simulation. What's missing is true feeling and the storyteller's art which LaFarge so beautifully supplies.” —Maureen Howard

Paul La Farge is the author of the novels The Artist of the Missing (FSG, 1999), Haussmann, or the Distinction (FSG, 2001), and Luminous Airplanes (FSG, 2011); and a book of imaginary dreams, The Facts of Winter. His short stories have appeared in McSweeney's, Harper's Magazine, Fence, Conjunctions, and elsewhere. His nonfiction appears in The Believer, Bookforum, Playboy, and Cabinet. He lives in upstate New York.

Stephen Alcorn studied printmaking in Italy and illustrated the Modern Library series. He is the 1998 recipient of the Carter G. Woodson Book Award.
Loading...
or support indie stores by buying on