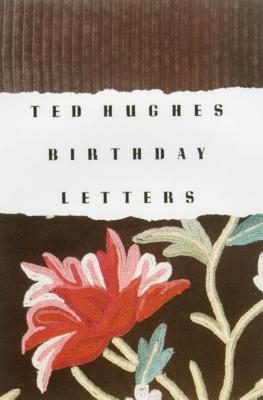 Formerly Poet Laureate to Queen Elizabeth II, the late Ted Hughes (1930-98) is recognized as one of the few contemporary poets whose work has mythic scope and power. And few episodes in postwar literature have the legendary stature of Hughes's romance with, and marriage to, the great American poet Sylvia Plath.

The poems in Birthday Letters are addressed (with just two exceptions) to Plath, and were written over a period of more than twenty-five years, the first a few years after her suicide in 1963. Some are love letters, others haunted recollections and ruminations. In them, Hughes recalls his and Plath's time together, drawing on the powerful imagery of his work--animal, vegetable, mythological--as well as on Plath's famous verse.

Countless books have discussed the subject of this intense relationship from a necessary distance, but this volume--at last--offers us Hughes's own account. Moreover, it is a truly remarkable collection of pems in its own right.

“An extraordinary book . . . [Hughes's] subject is Plath herself--how she looked and moved and talked, her pleasures, rages, uncanny dreams, and many terrors, what was good between them and where it went wrong.” —A. Alvarez, The New Yorker

“The critics who are urging us to regard these poems as masterpieces are right. Their intensity of feeling, the clarity of their imagery, the precision, energy, simplicity, and fluidity of their language are still striking.” —Paul Levy, The Wall Street Journal

“Most of the poems in Birthday Letters have a wonderful immediacy and tenderness that's new to Hughes's writing, a tenderness that enables him to communicate Plath's terrors as palpably as her own verse, and to convey his own lasting sense of loss and grief. . . . They should be read because they constitute the strongest, most emotionally tactile work of Hughes' career.” —Michiko Kakutani, The New York Times

“The publication of Birthday Letters is the most sensational event I can think of in the recent history of English-language poetry.” —Christopher Benfey, Slate

“The book comes like a thunderbolt from the blue. And reading it is like being hit by a thunderbolt. Its power is sometimes tender, sometimes funny, sometimes anguished, and always springing from a burning, continuous present. Anyone who thought Hughes's reticence was proof of his hard heart will immediately see how stony they have been themselves. This is a book written by someone obsessed, stricken, and deeply loving. There is nothing like it in literature.” —Andrew Motion, The London Times

TED HUGHES (1930-1998) published numerous volumes of poetry and prose for adults and children. He received the Guardian Award for Children's Fiction in 1985 and was appointed Poet Laureate of England in 1984.
Loading...
or support indie stores by buying on