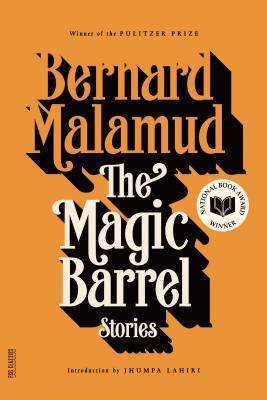 Winner of the National Book Award for Fiction

Bernard Malamud's first book of short stories, The Magic Barrel, has been recognized as a classic from the time it was published in 1959. The stories are set in New York and in Italy (where Malamud's alter ego, the struggleing New York Jewish Painter Arthur Fidelman, roams amid the ruins of old Europe in search of his artistic patrimony); they tell of egg candlers and shoemakers, matchmakers, and rabbis, in a voice that blends vigorous urban realism, Yiddish idiom, and a dash of artistic magic.

The Magic Barrel is a book about New York and about the immigrant experience, and it is high point in the modern American short story. Few books of any kind have managed to depict struggle and frustration and heartbreak with such delight, or such artistry.

“In the short story, Malamud achieved an almost psalmlike compression. He has been called the Jewish Hawthorne, but he might just as well be thought a Jewish Chopin, a prose composer of preludes and noctures.” —Mark Shechner, Partisan Review

“There are thirteen stoires in The Magic Barrel and every one of them is a small, highly individualized work of art. This is the kind of book that calls for not admiration but gratitude.” —Richard Sullivan, The Chicago Tribune