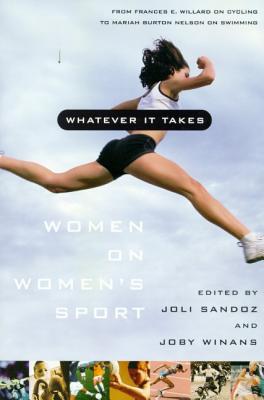 The first anthology of women's personal essays on sports, from Elizabeth Cady Stanton on bicycling to Anna Seaton Huntington on rowing

With edge, passion, and depth, Whatever It Takes demonstrates the enormous importance of sports for girls and women. These essays deal with everything from finding a mentor - whether it's an Olympic gold winner or a neighborhood coach-to reveling in female team spirit. There are historical selections, as well as discussions of such developments as Title IX. The contributors, including world-class athletes and celebrated writers from Mariah Burton Nelson and Grace Butcher to Diane Ackerman and Maxine Kumin, tackle traditional favorites such as basketball and softball as well as more exotic sports from boxing and motorcycle racing to rock climbing.

Both timely and riveting, Whatever It Takes will appeal to the rapidly growing ranks of female athletes and to their enthusiastic followers.


Praise For Whatever It Takes: Women on Women's Sport…

“The Magic Barrel is a work radiant with personal vision. Compassionate and profound in its wry humor, it captures the poetry of human relationships on the point where reality and imagination meet.” —National Book Award Jury, 1959

Joli Sandoz edited A Whole Other Ball Game (FSG, 1997) and teaches at Evergreen State College. She has played, coached, and written about sports since her first plunge off the starting blocks in 1961.

Joby Winans was a varsity collegiate athlete who now competes in road races and masters track and field. She works as a training and organizational development professional in Tacoma, Washington.
Loading...
or support indie stores by buying on