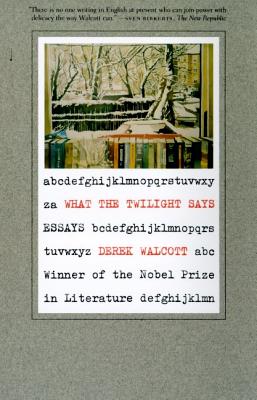 What the Twilight Says

The first collection of essays by the Nobel laureate.

Derek Walcott has been publishing essays in The New York Review of Books, The New Republic, and elsewhere for more than twenty years. What the Twilight Says collects these pieces to form a volume of remarkable elegance, concision, and brilliance. It includes Walcott's moving and insightful examinations of the paradoxes of Caribbean culture, his Nobel lecture, and his reckoning of the work and significance of such poets as Robert Lowell, Joseph Brodsky, Robert Frost, Les Murray, and Ted Hughes, and of prose writers such as V. S. Naipaul and Patrick Chamoiseau. On every subject he takes up, Walcott the essayist brings to bear the lyric power and syncretic intelligence that have made him one of the major poetic voices of our time.


Praise For What the Twilight Says: Essays…

“There is no one writing in English at present who can join power with delicacy the way Walcott can.” —Sven Birkerts, The New Republic

“Walcott is a kingfisher critic, with flashing insights, an original who writes a profound, poetic prose . . . Derek Walcott's words go from strength to strength.” —Paula Burnett, The Times (London)