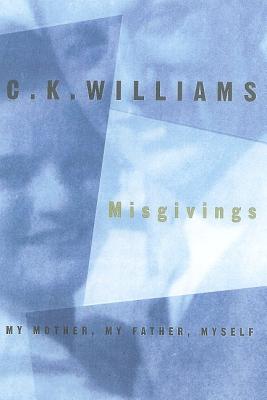 My Mother, My Father, Myself

Winner of the PEN/Voelcker career achievement award in poetry

Misgivings is C. K. William's searing recollection of his family's extreme dynamics and of his parents' deaths after years of struggle, bitterness, inner conflict, and, finally, love. Like Kafka's self-revealing Letter to His Father, Misgivings is a full of doubt, both philosophical and personal, but as a work of art it is sure and true.

Williams's father was an "ordinary businessman"--angry, demanding, addicted to the tension he created with the people he loved; a man who could recite the Greek myths to his son yet vowed never to apologize to anybody. Wiiiams's mother was a housewife, a woman with a great capacity for pleasure, who was stoical about the family's dire early poverty yet remained affected by it even when they became well-off. Together, these two formed what Williams calls the "conspiracy that made me who I am." His account of their life together and of their deaths--his father's in a final abandonment of the will to live, his mother's with calm resignation--is a literary form of the reconciliation the family achieved at the end of his parents' lives, composed as a series of short takes, a double helix of experience and recollection.


Praise For Misgivings: My Mother, My Father, Myself…

“This account of his parents and himself by C. K. Williams is among the finest memoirs ever written--in the tiny class of those masterpieces by J. R. Ackerly and Violette Leduc. It transcends them by dealing equally with both parents: pained, passionate but objective, scrupulous in observation, and as beautifully written as his extraordinary poems. On reading it, one is transported with a kind of awe at being in the presence of an instant classic.” —Carolyn Kizer

“Though Misgivings is intensely personal, Williams has touched on something universal in the experience of the death of one's parents, something perhaps that only the grace and economy of a great poet could capture.” —Diane Johnson

“C. K. William's Misgivings is a model of decency and honesty. As in his poems, he humanizes here whomever his gaze falls upon, revealing in the process what's most human about us all and what's usually most inaccessible to us . . . It's a beautiful book.” —Russell Banks

“A poet's knowing in intuition and memory inform this book, which, page by page, turns into a gift of psychological and moral wisdom--a writer's journey toward awareness becomes a reader's responsive experience.” —Robert Coles

“It is a small luxury to watch a writer construct character as skillfully as Williams does . . . [he] is a trenchant observer and a dedicated examiner of mind and motive.” —Brian Phillips, The New Republic

C. K. Williams (1936–2015) published twenty-two books of poetry including, Flesh and Blood, which won the National Book Critics Circle Award; Repair, which won the Pulitzer Prize in Poetry; and The Singing, winner of the National Book Award. Williams was awarded the Ruth Lilly Poetry Prize in 2005. He wrote a critical study, On Whitman; a memoir, Misgivings; and two books of essays, Poetry and Consciousness and In Time: Poets, Poems,and the Rest.
Loading...
or support indie stores by buying on