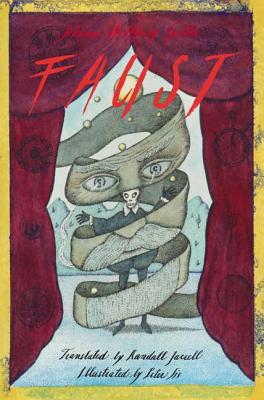 Randall Jarrell's translation of Faust is one of his most important achievements. In 1957 he inscribed Goethe's motto on the first page of his notebook--"Ohne Hast aber ohne Rast" ("Without haste but without rest")--and from then until his death in 1965 he worked on the masterpiece of his "own favorite daemon, dear good great Goethe." His intent was to make the German poetry free, unrhymed poetry in English. He all but finished the job before he died, and the few lines that remained untouched--"Gretchen's Room"--were rendered into English by Robert Lowell.

“Jarrell's lines, house-trained and pellucid, hover around truism, then skip ahead into originality . . . His ageless voice . . . pushes through the skein of Goethe's” —Wayne Koestenbaum, Bookforum

The German poet, novelist, playwright, courtier, scientist, and philosopher Johann Wolfgang von Goethe (1749-1832) ranks among the greatest authors of Western literature. His best known writings include The Sorrows of Young Werther (his first novel) and Faust (a drama in two parts).

Randall Jarrell, born in 1914 in Nashville, Tennessee, was a prolific and widely respected poet, critic, translator, and fiction writer. A friend and contemporary to Elizabeth Bishop and Robert Lowell, Jarrell received the National Book Award (amid other honors) for his verse. He also served as U.S. Poet Laureate. Jarrell died in Chapel Hill, North Carolina, in 1965.