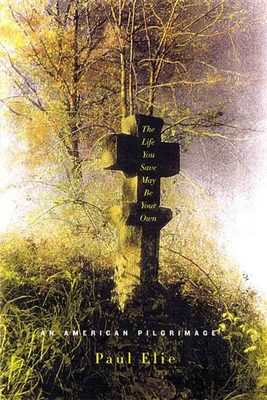 The Life You Save May Be Your Own

In the mid-twentieth century four American Catholics came to believe that the best way to explore the questions of religious faith was to write about them-in works that readers of all kinds could admire. The Life You Save May Be Your Own is their story-a vivid and enthralling account of great writers and their power over us.

Thomas Merton was a Trappist monk in Kentucky; Dorothy Day the founder of the Catholic Worker in New York; Flannery O'Connor a "Christ-haunted" literary prodigy in Georgia; Walker Percy a doctor in New Orleans who quit medicine to write fiction and philosophy. A friend came up with a name for them-the School of the Holy Ghost-and for three decades they exchanged letters, ardently read one another's books, and grappled with what one of them called a "predicament shared in common."

A pilgrimage is a journey taken in light of a story; and in The Life You Save May Be Your Own Paul Elie tells these writers' story as a pilgrimage from the God-obsessed literary past of Dante and Dostoevsky out into the thrilling chaos of postwar American life. It is a story of how the Catholic faith, in their vision of things, took on forms the faithful could not have anticipated. And it is a story about the ways we look to great books and writers to help us make sense of our experience, about the power of literature to change-to save-our lives.


Praise For The Life You Save May Be Your Own: An American Pilgrimage…

“Paul Elie's book is lucid, humane, poignant, and wise. As a work of the spirit, it is universal and in no way sectarian.” —Harold Bloom

“They make a memorable quartet--Dorothy Day, Thomas Merton, Flannery O'Connor, Walker Percy--in Paul Elie's brilliant new study. Founder of the Catholic Worker movement, Dorothy Day finally emerges as a saintly and heroic figure. Though I thought I knew everything about the other three, who were my close friends in our author-editor rapport, Elie's insights into each member of this highly gifted and complex trio (Merton, O'Connor, Percy) strike me as fresh and original and his discoveries are new. The Life You Save May Be Your Own is a remarkable book.” —Robert Giroux

“Paul Elie's book reads like a magnificent novel, with four deeply distinct characters who just happen to have been the best Catholic American writers of the twentieth century.” —Richard Rodriguez

“We are surrounded by many examples of mediocre criticism and not a few of good criticism, but great criticism comes our way but once or twice in a generation. Paul Elie's witty searchlight of a book is great criticism. Shining with insight on the multitesselated mosaic of American literature in the postwar period, it manages miraculously to illuminate the complexities of religious experience in real human lives.” —Thomas Cahill

Paul Elie, for many years a senior editor with FSG, is now a senior fellow with Georgetown University's Berkley Center for Religion, Peace, and World Affairs. His first book, The Life You Save May Be Your Own, received the PEN/Martha Albrand Prize and was a National Book Critics Circle award finalist in 2003. He lives in New York City.