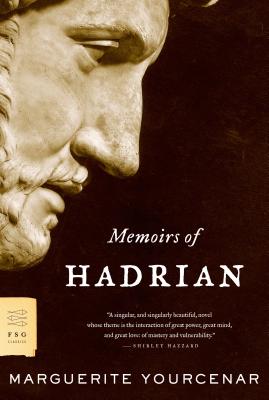 Both an exploration of character and a reflection on the meaning of history, Memoirs of Hadrian has received international acclaim since its first publication in France in 1951. In it, Marguerite Yourcenar reimagines the Emperor Hadrian's arduous boyhood, his triumphs and reversals, and finally, as emperor, his gradual reordering of a war-torn world, writing with the imaginative insight of a great writer of the twentieth century while crafting a prose style as elegant and precise as those of the Latin stylists of Hadrian's own era.

"If you want to know what 'ancient Roman' really means, in terms of war and religion and love and parties, read Memoirs of Hadrian." - The New Yorker

Marguerite Yourcenar (1903-87) wrote plays, stories, poems, and novels, including the notable Memoirs of Hadrian. She was the first woman to be elected to the Academie Francaise.

Grace Frick contributed to The Abyss from Farrar, Straus and Giroux.
Loading...
or support indie stores by buying on