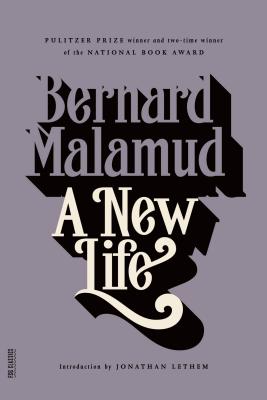 "An overlooked masterpiece. It may still be undervalued as Malamud's funniest and most embracing novel." --Jonathan Lethem

In A New Life, Bernard Malamud--generally thought of as a distinctly New York writer--took on the American myth of the West as a place of personal reinvention.

When Sy Levin, a high school teacher beset by alcohol and bad decisions, leaves the city for the Pacific Northwest to start over, it's no surprise that he conjures a vision of the extraordinary new life awaiting him there: "He imagined the pioneers in covered wagons entering this valley for the first time. Although he had lived little in nature Levin had always loved it, and the sense of having done the right thing in leaving New York was renewed in him." Soon after his arrival at Cascadia College, however, Levin realizes he has been taken in by a mirage. The failures pile up anew, and Levin, fired from his post, finds himself back where he started and little the wiser for it.

A New Life--as Jonathan Lethem's introduction makes clear--is Malamud at his best: with his belief in luck and new beginnings Sy Levin embodies the thwarted yearning for transcendence that is at the heart of all Malamud's work.


Praise For A New Life: A Novel (FSG Classics)…

“Malamud has written a moving, funny, satiric third novel ... rich in ideas, paradox and the variety of human nature... Levin is one of the most appealingly, sadly, funnily human people in recent fiction and A New Life is a wonderful book.” —Kirkus Reviews (Starred Review)

“The special qualities of Bernard Malamud's fiction which set it apart as serious art ... are its evocation of genuine pity for the calamities which overtake men, its scrupulous and deft playing of an ironic attitude against this pity, and its insistently moral structuring of event.” —The New York Times