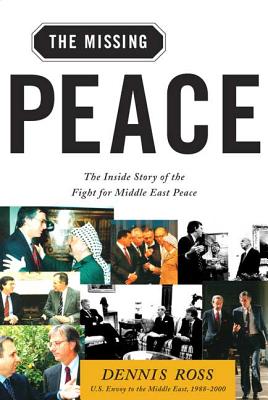 The Inside Story of the Fight for Middle East Peace

"The definitive and gripping account of the sometimes exhilarating, often tortured twists and turns in the Middle East peace process, viewed from the front row by one of its major players."--Bill Clinton

The Missing Peace, published to great acclaim last year, is the most candid inside account of the Middle East peace process ever written. Dennis Ross, the chief Middle East peace negotiator in the presidential administrations of George H. W. Bush and Bill Clinton, is that rare figure who is respected by all parties: Democrats and Republicans, Palestinians and Israelis, presidents and people on the street in Jerusalem, Ramallah, and Washington, D.C.

Ross recounts the peace process in detail from 1988 to the breakdown of talks in early 2001 that prompted the so-called second Intifada-and takes account of recent developments in a new afterword written for this edition. It's all here: Camp David, Oslo, Geneva, Egypt, and other summits; the assassination of Yitzak Rabin; the rise and fall of Benjamin Netanyahu; the very different characters and strategies of Rabin, Yasir Arafat, and Bill Clinton; and the first steps of the Palestinian Authority. For the first time, the backroom negotiations, the dramatic and often secretive nature of the process, and the reasons for its faltering are on display for all to see. The Missing Peace explains, as no other book has, why Middle East peace remains so elusive.


Praise For The Missing Peace: The Inside Story of the Fight for Middle East Peace…

“Important, voluminous and keenly balanced . . . Ross's analysis of the peace process is astute, but the real service he performs in this book is less in explaining the meaning of events than in setting the record straight.” —Ethan Bronner, The New York Times Book Review

“The Missing Peace is the definitive and gripping account of the sometimes exhilarating, often tortured twists and turns in the Middle East peace process, viewed from the front row by one of its major players, Dennis Ross. No one worked harder for peace than Dennis. He gave it everything he had and served our nation very well. Now he has provided us with a rich account of what happened that is essential to understanding both the past and the possible paths to the future.” —President William J. Clinton

“The Missing Peace is a brilliant behind-the-scenes account of history in the making. Only Dennis Ross could have written such a lively, provocative and insightful book. This definitive telling of a fascinating and tragic tale will be indispensable to any serious student of the Arab-Israeli dispute.” —Madeleine Albright, former U.S. Secretary of State

“I've never known anyone so deeply committed to the cause of peace in the Middle East as Dennis Ross. This book reflects not only that dedication but his brilliance in writing about it in a colorful and comprehensive way.” —Warren Christopher, former U.S. Secretary of State

“The Missing Peace is amazing narrative. Ross, who knows Mideast diplomacy better than any other American, does something essential if there is ever to be peace: quite simply, he tells the truth. In doing so, he dispells the myths that block a deal. This is the one essential book that should be read by everyone who cares about this crucial topic.” —Walter Isaacson, President of the Aspen Institute and author of Benjamin Franklin: An American Life

“Few Americans have had a more intimate involvement with the complex issues that divide the Middle East than Dennis Ross, as U.S. envoy and chief negotiator under two Presidents. The Missing Peace presents a candid, thoughtful and detailed picture of the process and the participants.” —Dr. Henry Kissinger, former U.S. Secretary of State

“Dennis Ross was at the heart of Israeli-Palestinian negotiations for twelve momentous and tumultuous years. He provides in fascinating detail his account of what happened and his reasoning as events transpired. He rendered a great public service as tireless negotiator and has done so again with this well-written and instructive book--a classic must-read for anyone interested in the Middle East.” —George Shultz, former U.S. Secretary of State

“The Missing Peace is imbued with wisdom, and it analytical content is vital in helping understand the complex facets of the Middle East. It is written with a mix of empathy and sadness, in character with the conflicting nature of the region.” —Shimon Peres, former Israeli Prime Minister