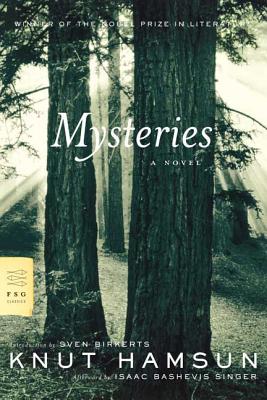 In a Norwegian coastal town, society's carefully woven threads begin to unravel when an unsettling stranger named Johan Nagel arrives. With an often brutal insight into human nature, Nagel draws out the townsfolk, exposing their darkest instincts and suppressed desires. At once arrogant and unassuming, righteous and depraved, Nagel seduces the entire community even as he turns it on its head—before disappearing as suddenly as he arrived.

“Mysteries is as immediate and haunting as last night's dreams (or nightmares).” —Christopher Lehmann-Haupt, The New York Times

“Hamsun, perhaps more than any other writer, prefigured the techniques and attitudes of modernism.” —Peter S. Prescott, Newsweek

Knut Hamsun (1859-1952) was a Norwegian novelist, poet, and playwright. He was awarded the Nobel Prize in Literature in 1920. He is the author of books including Hunger and Mysteries.

Sven Birkerts is the author of several books, including The Art of Time in Memoir, Reading Life, Readings, and The Gutenberg Elegies. He has taught at Harvard University and currently directs the Bennington Writing Seminars and is the editor of AGNI. He lives in Massachusetts.

Isaac Bashevis Singer (1904-91) was the author of many novels, stories, and children's books. His books include The Slave and Gimpel the Fool and Other Stories. He received the Nobel Prize in Literature in 1978.
Loading...
or support indie stores by buying on