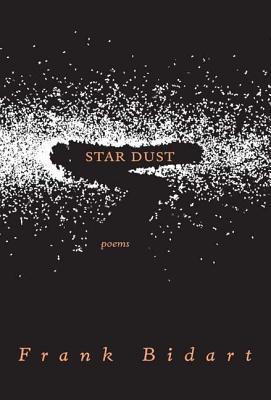 In 2002, Frank Bidart published a sequence of poems, Music Like Dirt, the first chapbook ever to be a finalist for the Pulitzer Prize. From the beginning, he had conceived this sequence as the opening movement in a larger structure--now, with Star Dust, finally complete.

In this profound and unforgettable new book, the dream beyond desire (which now seems to represent human destiny) is rooted in the drive to create, a drive tormented at every stage by failure, as the temporal being fights for its survival by making an eternal life. Bidart is a poet of passionate originality, and Star Dust shows that the forms of this originality continue to deepen and change as he constantly renews his contract with the idea of truth.

Star Dust is a 2005 National Book Award Finalist for Poetry.

Frank Bidart is the author of Metaphysical Dog (FSG, 2013), Watching the Spring Festival (FSG, 2008), Star Dust (FSG, 2005), Desire (FSG, 1997), and In the Western Night: Collected Poems 1965-90 (FSG, 1990). He has won many prizes, including the Wallace Stevens Award, the 2007 Bollingen Prize in American Poetry, and the National Book Critics Circle Award. His book Half-Light: Collected Poems 1965-2016 won the 2018 Pulitzer Prize and the 2017 National Book Award. He teaches at Wellesley College and lives in Cambridge, Massachusetts.

“Bidart is dazzled, confounded and compelled by words, and he wants us to feel the same way . . . [He] has a fastidious sense of poetic craft, but he has faith in primal energies too . . . What Bidart proposes, to balance the moral and aesthetic risks that he takes in Star Dust, is the largest possible conception of poetry's powers.” —Langdon Hammer, The New York Times Book Review