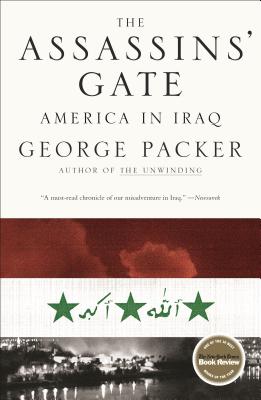 The Assassins' Gate: America in Iraq recounts how the United States set about changing the history of the Middle East and became ensnared in a guerrilla war in Iraq. It brings to life the people and ideas that created the Bush administration's war policy and led America to the Assassins' Gate—the main point of entry into the American zone in Baghdad.

The Assassins' Gate also describes the place of the war in American life: the ideological battles in Washington that led to chaos in Iraq, the ordeal of a fallen soldier's family, and the political culture of a country too bitterly polarized to realize such a vast and morally complex undertaking. George Packer's best-selling first-person narrative combines the scope of an epic history with the depth and intimacy of a novel, creating a masterful account of America's most controversial foreign venture since Vietnam.


Praise For The Assassins' Gate: America in Iraq…

“The most complete, sweeping, and powerful account of the Iraq War.”—Keith Gessen, New York Magazine

“A book that is not only relevant but discerning and provocative. [Packer] offers the vivid detail and balanced analysis that have made him one of the leading chroniclers of the Iraq war.”—Yonatan Lupu, San Francisco Chronicle

“The great strength of George Packer's book is that it gives a fair hearing to both views. Free of cant—but not, crucially, of anger—Mr. Packer has written an account of the Iraq war that will stand alongside such narrative histories as A Bright Shining Lie, Fire in the Lake and Hell in a Very Small Place. As a meditation on the limits of American power, it's sobering.”—Tom Bissell, The New York Observer

“A brilliantly reported analysis of the war in Iraq.”—GQ

“Masterful...Packer's sketch of the prewar debates is subtle, sharp and poignant...His reporting from Iraq was always good, but the book is even better, putting the reader at the side of Walter Benjamin's angel of history, watching helplessly as the wreckage unfolds at his feet.”—Gideon Rose, Washington Post Book World (cover review)

“Packer provides page after page of vivid description of the haphazard, poorly planned and almost criminally executed occupation of Iraq. In reading him we see the staggering gap between abstract ideas and concrete reality.”—Fareed Zakaria, The New York Times Book Review (cover review)