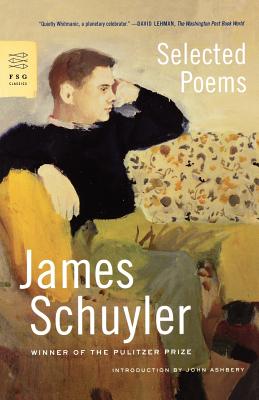 In Selected Poems, we experience the full range of James Schuyler's achievement, confirming that he was among the late twentieth century's truly vital and distinctive poetic voices. One of the most significant writers of the New York School—which unofficially included John Ashbery, Frank O'Hara, and Kenneth Koch, among others—Schuyler was strongly influenced by both art and music in his work, often incorporating rapid shifts in sound, shape, and color within his poems that almost gave his work the effect of a collage and engendered comparisons with Whitman and Rimbaud.

"This posthumous collection of Schuyler's (1923-1991) work will confirm the poet's mastery of a type of poem made famous by his friend Frank O'Hara in the late 1950s. ...Rarely has a poet imparted so much of his experience as honestly and engagingly as Schuyler does here." - Publishers Weekly

James Schuyler (1923-91) received the Pulitzer Prize for poetry for The Morning of the Poem in 1981.

John Ashbery’s latest book of poems is Quick Question. From 1960 to 1965, he was the International Herald Tribune art critic and the ARTnews Paris correspondent. France has named him a Chevalier de l’ordre des Arts et des Lettres and an Officier de la Légion d’honneur. He has received a National Book Foundation Medal for Distinguished Contribution to American Letters, and was awarded a National Humanities Medal by President Obama.
Loading...
or support indie stores by buying on