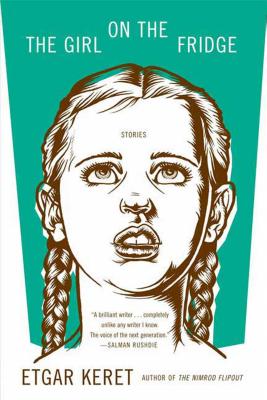 The Girl on the Fridge

A birthday-party magician whose hat tricks end in horror and gore; a girl parented by a major household appliance; the possessor of the lowest IQ in the Mossad—such are the denizens of Etgar Keret's dark and fertile mind. The Girl on the Fridge contains the best of Keret's first collections, the ones that made him a household name in Israel and the major discovery of this last decade.


Praise For The Girl on the Fridge: Stories…

“Keret is a brilliant writer . . . completely unlike any writer I know. He is the voice of the next generation.” —Salman Rushdie

“Keret may be the most important writer working in Israel right now; certainly he is the closest observer of its post-intifada, post-Oslo spiritual condition. And astonishingly, he is also the Israeli writer closest to the literary tradition of pre-Israel, pre- Holocaust European Jewry . . . Kafka said that literature should be an ax to break the frozen sea within us. Keret is a writer whaling at the ice with a Wiffle ball bat.” —Stephen Marche, The Forward

“Short, strange, funny, deceptively casual in tone and affect, stories that sound like a joke but aren't--Etgar Keret is a writer to be taken seriously.” —Yann Martel

“Keret can do more with six . . . paragraphs than most writers can with 600 pages.” —Kyle Smith, People

Etgar Keret was born in Tel Aviv in 1967. His stories have been featured on This American Life and Selected Shorts. As screenwriters/ directors, he and his wife, Shira Geffen, won the 2007 Palme d’Or for Best Debut Feature (Jellyfish) at the Cannes Film Festival. His books include The Nimrod Flipout and Suddenly, a Knock on the Door.
Loading...
or support indie stores by buying on
(This book is on backorder)