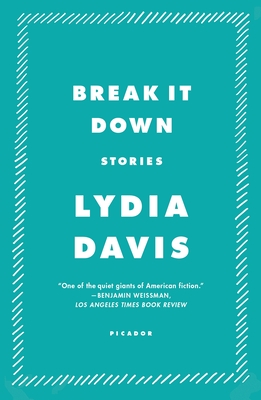 The thirty-four stories in this seminal collection powerfully display what have become Lydia Davis's trademarks—dexterity, brevity, understatement, and surprise.

Although the certainty of her prose suggests a world of almost clinical reason and clarity, her characters show us that life, thought, and language are full of disorder. Break It Down is Davis at her best. In the words of Jonathan Franzen, she is "a magician of self-consciousness."


Praise For Break It Down: Stories (FSG Classics)…

"Autobiographical in texture, introspective in tone, these stories are grounded in sufficient detail to offer a peephole into a distinct fictional world; and in doing so, they attest to the author's gift as an observer and archivist of emotion."—The New York Times

"An American virtuoso of the short story form."—Salon

"Davis is one of the most precise and economical writers we have."—Dave Eggers, McSweeney's

Lydia Davis is the author of The End of the Story: A Novel and several story collections. Her collection Varieties of Disturbance: Stories was a finalist for the 2007 National Book Award. She is the recipient of a MacArthur fellowship, the American Academy of Arts and Letters’ Award of Merit Medal, and was named a Chevalier of the Order of the Arts and Letters by the French government for her fiction and her translations of modern writers, including Maurice Blanchot, Michel Leiris, and Marcel Proust. Lydia Davis is the winner of the 2013 Man Booker International Prize.
Loading...
or
Not Currently Available for Direct Purchase