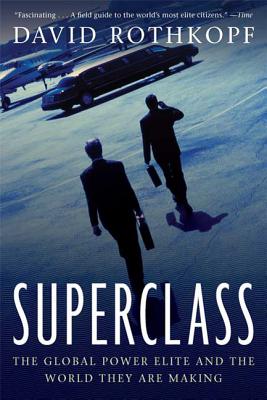 The Global Power Elite and the World They Are Making

Each of them is one in a million. They number six thousand on a planet of six billion. They run our governments, our largest corporations, the powerhouses of international finance, the media, world religions, and, from the shadows, the world's most dangerous criminal and terrorist organizations. They are the global superclass, and they are shaping the history of our time.

Today's superclass has achieved unprecedented levels of wealth and power. They have globalized more rapidly than any other group. But do they have more in common with one another than with their own countrymen, as nationalist critics have argued? They control globalization more than anyone else. But has their influence fed the growing economic and social inequity that divides the world? What happens behind closeddoor meetings in Davos or aboard corporate jets at 41,000 feet? Conspiracy or collaboration? Deal-making or idle self-indulgence? What does the rise of Asia and Latin America mean for the conventional wisdom that shapes our destinies? Who sets the rules for a group that operates beyond national laws?

Drawn from scores of exclusive interviews and extensive original reporting, Superclass answers all of these questions and more. It draws back the curtain on a privileged society that most of us know little about, even though it profoundly affects our everyday lives. It is the first in-depth examination of the connections between the global communities of leaders who are at the helm of every major enterprise on the planet and control its greatest wealth. And it is an unprecedented examination of the trends within the superclass, which are likely to alter our politics, our institutions, and the shape of the world in which we live.


Praise For Superclass: The Global Power Elite and the World They Are Making…

“Whether you like it or not, there is no way to deny the enormous, disproportionate, concentration of power and wealth in the hands of a relatively small number of people in the world today. David Rothkopf has vividly described who they are, and how they operate and interact, in his valuable (and often disturbing) new book.” —Richard Holbrooke, Former U.S. Ambassador to the United Nations

“No, no vast conspiracy runs the world. But, according to Rothkopf's book, a tiny but diverse global elite, a Superclass, comes close. His finely-honed prose takes the reader on a joyous, entertaining, and erudite romp around the globe in search of that class.” —Alan Blinder, Former Vice Chairman of the Federal Reserve Bank of the United States

“Thanks to Rothkopf's special blend of analysis, direct interaction with his subjects and vivid writing, this is a must read book for people interested in understanding the genesis of leadership in the new global economy.” —Ernesto Zedillo, Director of the Yale Center for the Study of Globalization and Former President of Mexico

“David Rothkopf has written a super book about the people presently executing an historic shift of world economic and political power and about how they are doing it and why. If you want to know how your choices are being determined and the circumstances of your life conditioned, you must read this book.” —Clyde Prestowitz, President of the Economic Strategy Institute and author of Three Billion New Capitalists

“The activities of a growing cosmopolitan elite are having profound effects. They can be highly desirable when they promote international cooperation or more problematic when the interests of the elites diverge from those of their citizens. David Rothkopf's Superclass skillfully probes these issues and many more and should be read by all those concerned with the international economy and the evolving global system.” —Lawrence Summers, former U.S. Secretary of the Treasury

“Superclass is a timely and detailed analysis of the disproportionate power and hence responsibility of an incredibly small group of individuals: the global power elites whose strongest allegiances are not with their countries but with each other. Understanding the implications of this shift beyond the nation-state is of great importance and Rothkopf has made a significant first step.” —Bob Wright, Vice Chairman, General Electric, and former President and CEO, NBC Universal

“An entertaining and well researched taxonomy of the rich and powerful who shape foreign policy and business in our globalized world. Rothkopf gives us the story behind Davos Man.” —Joseph E. Stiglitz, Nobel Prize Winner in Economics and author of Making Globalization Work and Globalization and its Discontents

“A masterful portrait of this century's global elite: who they are, how they run the world, and why you should worry about the increasing concentration of influence, wealth and power they represent. An insider and a globalizer himself, Rothkopf knows his people and his politics, and uses history, psychology, economics and a lot of awfully good stories to ask troubling new questions about globalization as we know it. It's smart and it's fun. And if you are a globophile who trusts greater prosperity and stability to disinterested markets, it will make you think again.” —Nancy Birdsall, President, Center for Global Development

“In his lively and brilliantly written book Superclass, David Rothkopf has captured the multitude and density of cross-border connections and interactions among the influential, rich and famous throughout the world. He compellingly describes how those links are shaping the global economic and political landscape today--and how they will powerfully influence the future institutions and politics of our planet.” —Robert Hormats, Vice Chairman, Goldman Sachs (International) and author of The Price of Liberty: Paying for America's Wars