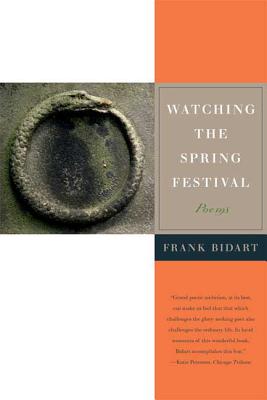 This is Frank Bidart's first book of lyrics—his first book not dominated by long poems. Narrative elaboration becomes speed and song. Less embattled than earlier work, less actively violent, these new poems have, by conceding time's finalities and triumphs, acquired a dark radiance unlike anything seen before in Bidart's long career.

Mortality—imminent, not theoretical—forces the self to question the relation between the actual life lived and what was once the promise of transformation. This plays out against a broad landscape. The book opens with Marilyn Monroe, followed by the glamour of the eighth-century Chinese imperial court (seen through the eyes of one of China's greatest poets, Tu Fu). At the center of the book is an ambitious meditation on the Russian ballerina Ulanova, Giselle, and the nature of tragedy. All this gives new dimension and poignance to Bidart's recurring preoccupation with the human need to leave behind some record or emblem, a made thing that stands, in the face of death, for the possibilities of art.

Bidart, winner of the 2007 Bollingen Prize in American Poetry, is widely acknowledged as one of the significant poets of his time. This is perhaps his most accessible, mysterious, and austerely beautiful book.

“Frank Bidart has patiently amassed as profound and original a body of work as any now being written in this country . . . One of the great poets of our time.” —Louise Glück, citation for the 2000 Wallace Stevens Award

“An unearthly mixture of the Dionysian and the Apollonian impulses, the terrifying and the humane, the wildly inspired and the minutely crafted, Bidart's poems--eerie, robing, sometimes shocking, always subtle--venture into psychic terrain left largely unmapped in contemporary poetry.” —from the citation for the 2007 Bollingen Prize for Poetry

“These poems offer no compromise, no synthesis, for the sentiments that collide in them: they are the products of long thought and great craft, but only in the sense in which a bonfire might be called the product of logs . . . No poet so deliberate, so thoughtful, has seemed at the same time so chthonically driven, so compelled to make what he makes and nothing else . . . If we want profundity, harsh originality, unequalled compression, deft syntax and difficult wisdom, we should hold dear what Bidart can now give.” —Stephen Burt, London Review of Books

“Full of rage even when most melancholy or sweet, [Bidart's] voice leaps off the page toward his subjects, and toward the reader . . . Grand poetic ambition, at its best, can make us feel that that which challenges the glory-seeking poet also challenges the ordinary life. In lucid moments of this wonderful book, Bidart accomplishes this feat.” —Katie Peterson , Chicago Tribune

“For this poet the storytelling function of narrative often contains the grievous and exalted emotional states more traditionally associated with dramatic catharsis . . . Bidart has succeeded at returning us to belief not in what we will to be the case, but rather in those forces to which our will is inevitably suborned, and by which our will, inevitable and impossible, is defined. That is a life, and an artistry, magnificently well spent.” —Raymond McDaniel, Boston Review

“Relentless in evoking ‘the great / grounding events' from his own life precisely enough that they become a kind of mirror, Bidart is supreme among contemporary poets in revealing the lineaments of the twisting, yearning soul.” —American Poet

Frank Bidart is the author of Metaphysical Dog (FSG, 2013), Watching the Spring Festival (FSG, 2008), Star Dust (FSG, 2005), Desire (FSG, 1997), and In the Western Night: Collected Poems 1965-90 (FSG, 1990). He has won many prizes, including the Wallace Stevens Award, the 2007 Bollingen Prize in American Poetry, and the National Book Critics Circle Award. His book Half-Light: Collected Poems 1965-2016 won the 2018 Pulitzer Prize and the 2017 National Book Award. He teaches at Wellesley College and lives in Cambridge, Massachusetts.
Loading...
or support indie stores by buying on