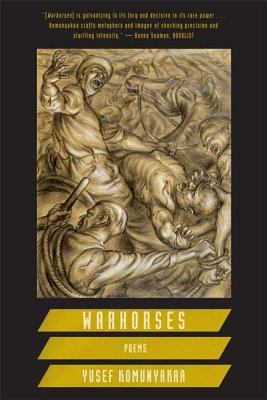 This powerful collection of Yusef Komunyakaa's poetry delves, with his characteristic allusiveness, intelligence, and intensity, into an age of war and conflict, both global and internal, racial and sexual. "Sweetheart, was I talking war in my sleep / again?" he asks, and the question is hardly moot: "Sometimes I hold you like Achilles' / shield," and indeed all relationships, in this telling, are sites of violence and battle. His line is longer and looser than in Taboo or Talking Dirty to the Gods, and in long poems like "Autobiography of My Alter Ego" he sounds almost breathless, an exhausted but desperate prophet. With the leaps and improvisational flourishes of a jazz soloist, Komunyakaa imagines "the old masters of Shock & Awe" daydreaming of "lovely Penelope / like a trophy." Warhorses is the stunning work of a Pulitzer Prize-winning poet who never ceases to challenge and delight his readers.

“Verses that practically sizzle and spark with intelligence . . . Komunyakaa thinks like a scholar and writes like a jazz musician. His poems wail and swing to the backbeat of African-American history, dropping knowledge with a wink and a nod to let you know, yes, this man knows a thing or two about what he's talking about.” —John Freeman, The Philadelphia Inquirer

“Yusef Komunyakaa is . . . one of our period's most significant and individual voices . . . He has a near-revelatory capacity to give himself over to his subject matter and to the taut concision of his free verse . . . Dazzling.” —David Wojahn, Poetry

“[Warhorses ] is galvanizing in its fury and decisive in its rare power . . . Komunyakaa crafts metaphors and images of shocking precision and startling intensity.” —Donna Seaman, Booklist