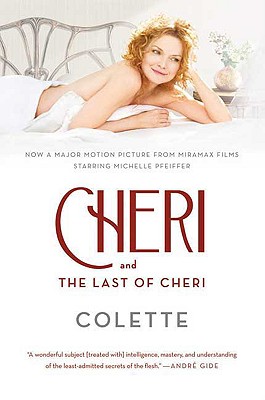 Cheri and The Last of Cheri

Chéri is one of the most honest, sensual, and poignant breakup stories ever written. First published in 1920, it was instantly greeted by Marcel Proust and André Gide as a masterpiece and today remains Colette’s most admired work.

Léa de Lonval is an aging courtesan, a once famous beauty facing the end of her sexual career. She is also facing the end of her most intense love affair, with Fred Peloux—known as Chéri—a playboy half her age. But neither lover under-stands how deeply they are attached, or how much life they will give up by parting ways. A classic portrait of French manners before World War I, Chéri also captures a lasting truth about the connections between sex, love, and feelings of mortality. This new edition includes The Last of Chéri, an epilogue in which Colette depicts Paris reeling in the aftermath of war, at the start of the Roaring Twenties.


Praise For Cheri and The Last of Cheri…

“A wonderful subject [treated with] intelligence, mastery, and understanding of the least-admitted secrets of the flesh.”—André Gide

Colette (1873-1954) published some eighty volumes of fiction and nonfiction. She also had careers as a newspaper reporter, screenwriter, and musichall star. Acknowledged in her lifetime as a master of modern French prose, she was the first woman admitted into the Academie Goncourt. Judith Thurman is the author of "Secrets of the Flesh: A Life of Colette," which was awarded both the Los Angeles Times Book Prize and the Salon Book Award for biography. She is a regular contributor to "The New Yorker."

What did you discover about Colette’s life by reading Judith Thurman’s introduction? Why might Colette have opposed suffragettes while applauding women who were financially independent? How did the knowledge of Colette’s later affair with her stepson affect your reading of Chéri?

Discuss the novel’s theme of physical beauty. Does a woman’s power lie in her appearance? When it comes to aging and the laws of attraction, do equal standards exist between men and women?

In the novel, power is also derived by showing no desire: both Léa and Chéri are careful not to reveal their feelings for each other. Do you think this is the way most couples experience a relationship? Would Léa and Chéri have stayed together if they had talked of love sooner, or did uncertainty keep their relationship alive?

Do Madame Peloux and Madame Marie-Laure (Edmée’s mother) have similar approaches to parenting? Are they good mothers?

What did Patron, the boxer, try to teach Chéri about being a man? What does Chéri seem to believe about the differences between men and women? Why does his femininity vex Léa?

To what extent does Léa act as a surrogate mother for Chéri? Is it good for wives and girlfriends to behave maternally toward their men?

What are the other effects of the age difference between Chéri and Léa? How does age give Léa an advantage over Edmée?

How does Desmond’s club reflect France’s cultural history during this time period? What was symbolic about the sale of Léa’s home (to Americans, no less)?

What does Chéri mean when, on page 263, he says that he is chaste while the rest of the world is mired in deception? Is he right?

Does Léa’s life appeal to you? Who is her twenty-first-century equivalent?

Would Léa have married Chéri, given the chance? Would their marriage have been happier than his marriage to Edmée? What is the difference between Léa’s financial power and Edmée’s?

What pain is Chéri trying to relieve in the closing scene of The Last of Chéri? Do his actions mean that Léa “won”?

What distinctions did you notice between Chéri and the film? What might Colette have said about the production? What made Michelle Pfeiffer ideal for the role of Léa?

Which of Colette’s novels had you read previously? How does Chéri other portrayals of men as lovers?