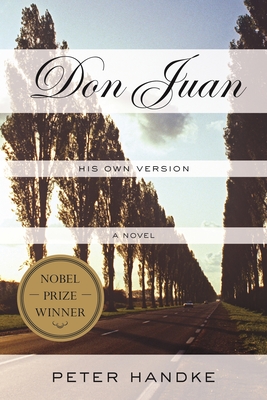 His Own Version: A Novel

Don Juan's story—"his own version"—is filtered through the consciousness of an anonymous narrator, a failed innkeeper and chef, into whose solitude Don Juan bursts one day. On each day of the week that follows, Don Juan describes the adventures he experienced on that same day a week earlier. The adventures are erotic, but Handke's Don Juan is more pursued than pursuer. What makes his accounts riveting are the remarkable evocations of places and people, and the nature of his narration. Don Juan: His Own Version is, above all, a book about storytelling and its ability to burst the ordinary boundaries of time and space.

In this brief and wry volume, Peter Handke conjures images and depicts the subtleties of human interaction with an unforgettable vividness. Along the way, he offers a sharp commentary on many features of contemporary life.

Krishna Winston is the Marcus L. Taft Professor of German Language and Literature at Wesleyan University. She has translated more than thirty books, including five previous works by Peter Handke and works by Werner Herzog, Günter Grass, Christoph Hein, and Goethe.

Praise For Don Juan: His Own Version: A Novel…

“Handke's power of observation and his seemingly casual tone, in which every word bears indispensable weight, are as mesmerizing as ever . . . A Handke tale invites active reading, speculation rather than passive absorption . . . It is [his] loving gaze, honed by time and discipline, that shows readers the way out again into the world's prolific and astonishing strangeness.” —KAI MARISTED, The New York Times Book Review

"Handke’s perfectly suave novella is a rich tapestry of contradictions about desire and class that, besides its other pleasures, tweaks us with the facts that the chef, not Juan, narrates it and that it provocatively begs the question, Version of what?" - Booklist