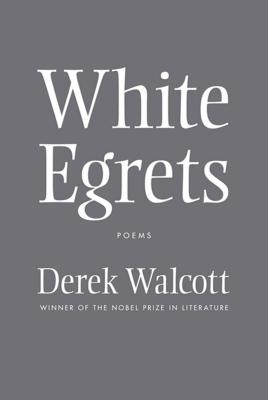 In White Egrets, Derek Walcott treats the characteristic subjects of his career—the Caribbean's complex colonial legacy, his love of the Western literary tradition, the wisdom that comes through the passing of time, the always strange joys of new love, and the sometimes terrifying beauty of the natural world—with an intensity and drive that recall his greatest work. Through the mesmerizing repetition of theme and imagery, Walcott creates an almost surflike cadence, broadening the possibilities of rhyme and meter, poetic form and language.

White Egrets is a moving new collection from one of the most important poets of the twentieth century—a celebration of the life and language of the West Indies. It is also a triumphant paean to beauty, love, art, and—perhaps most surprisingly—getting older.

“No poet rivals Mr. Walcott in humor, emotional depth, lavish inventiveness in language or in the ability to express the thoughts of his characters and compel the reader to follow the swift mutations of ideas and images in their minds . . . [His poetry] makes us realize that history, all of it, belongs to us.” —The New York Times Book Review on Derek Walcott