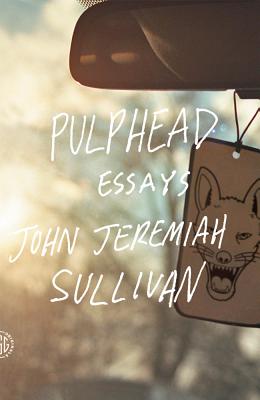 Named A Best Book of 2011 by the New York Times, Time Magazine, the Boston Globe and Entertainment Weekly

A sharp-eyed, uniquely humane tour of America's cultural landscape—from high to low to lower than low—by the award-winning young star of the literary nonfiction world.

In Pulphead, John Jeremiah Sullivan takes us on an exhilarating tour of our popular, unpopular, and at times completely forgotten culture. Simultaneously channeling the gonzo energy of Hunter S. Thompson and the wit and insight of Joan Didion, Sullivan shows us—with a laidback, erudite Southern charm that's all his own—how we really (no, really) live now.

In his native Kentucky, Sullivan introduces us to Constantine Rafinesque, a nineteenth-century polymath genius who concocted a dense, fantastical prehistory of the New World. Back in modern times, Sullivan takes us to the Ozarks for a Christian rock festival; to Florida to meet the alumni and straggling refugees of MTV's Real World, who've generated their own self-perpetuating economy of minor celebrity; and all across the South on the trail of the blues. He takes us to Indiana to investigate the formative years of Michael Jackson and Axl Rose and then to the Gulf Coast in the wake of Katrina—and back again as its residents confront the BP oil spill.

Gradually, a unifying narrative emerges, a story about this country that we've never heard told this way. It's like a fun-house hall-of-mirrors tour: Sullivan shows us who we are in ways we've never imagined to be true. Of course we don't know whether to laugh or cry when faced with this reflection—it's our inevitable sob-guffaws that attest to the power of Sullivan's work.

“Sullivan seems able to do almost anything, to work in any register, and not just within a single piece but often in the span of a single paragraph…Pulphead is the best, and most important, collection of magazine writing since Wallace's A Supposedly Fun Thing I'll Never Do Again…Sullivan's writing is a bizarrely coherent, novel, and generous pastiche of the biblical, the demotic, the regionally gusty and the erudite.” —New York Times Book Review

“[Pulphead is] a big and sustaining pile of--as I've heard it put about certain people's fried chicken--crunchy goodness . . . What's impressive about Pulphead is the way these disparate essays cohere into a memoirlike whole. The putty that binds them together is Mr. Sullivan's steady and unhurried voice. Reading him, I felt the way Mr. Sullivan does while listening to a Bunny Wailer song called ‘Let Him Go.' That is, I felt ‘like a puck on an air-hockey table that's been switched on.' Like well-made songs, his essays don't just have strong verses and choruses but bridges, too, unexpected bits that make subtle harmonic connections . . . The book has its grotesques, for sure. But they are genuine and appear here in a way that put me in mind of one of Flannery O'Connor's indelible utterances. ‘Whenever I'm asked why Southern writers particularly have a penchant for writing about freaks,' O'Connor said, 'I say it is because we are still able to recognize one.'” —New York Times

"[Sullivan] seems to have in abundance the storyteller’s gifts: he is a fierce noticer, is undauntedly curious, is porous to gossip, and has a memory of childlike tenacity . . . Unlike Tom Wolfe or Joan Didion, who bring their famous styles along with them like well-set, just-done hair, Sullivan lets his subjects muss and alter his prose; he works like a novelist." —James Wood, New Yorker

“Sullivan's essays stay with you, like good short stories--and like accomplished short fiction, they often will, over time, reveal a fuller meaning . . . Whether he ponders the legacy of a long-dead French scientist or the unlikely cultural trajectory of Christian rock, Sullivan imbues his narrative subjects with a broader urgency reminiscent of other great practitioners of the essay-profile, such as New Yorker writers Joseph Mitchell and A. J. Liebling or Gay Talese during his '60s Esquire heyday . . . [Pulphead] reinforces [Sullivan's] standing as among the best of his generation's essayists.” —Bookforum

“One ascendant talent who deserves to be widely read and encouraged is John Jeremiah Sullivan . . . Pulpheadis one of the most involving collections of essays to appear in many a year.” —Larry McMurtry, Harper's Magazine

“[The essays in Pulphead are] among the liveliest magazine features written by anyone in the past 10 years . . . What they have in common, though, whether low or high of brow, is their author's essential curiosity about the world, his eye for the perfect detail, and his great good humor in revealing both his subjects' and his own foibles . . . a collection that shows why Sullivan might be the best magazine writer around.” —NPR

“Each beautifully crafted essay in John Jeremiah Sullivan's collection Pulphead is a self-contained world…Sullivan's masterful essays invite an honest confrontation with reality, especially when considered in light of one another….Pulphead compels its readers to consider each as an equal sum in the bizarre arithmetic of American identity . . . [Sullivan is] as red-hot a writer as they come.” —BookPage

“The age-old strangeness of American pop culture gets dissected with hilarious and revelatory precision…Sullivan writes an extraordinary prose that's stuffed with off-beat insight gleaned from rapt, appalled observations and suffused with a hang-dog charm. The result is an arresting take on the American imagination.” —Publishers Weekly (starred review)

John Jeremiah Sullivan is a contributing writer for The New York Times Magazine and the southern editor of The Paris Review. He writes for GQ, Harper's Magazine, and Oxford American, and is the author of Blood Horses and Pulphead. Sullivan lives in Wilmington, North Carolina.
Loading...
or support indie stores by buying on