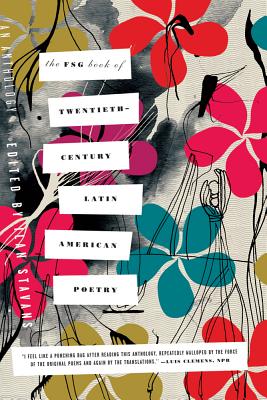 A comprehensive, multi-lingual anthology of 20th-century Latin American Poetry in both Spanish and Portuguese.

During a century of extraordinary change, poets became the chroniclers of deep polarizations. From Rubén Darío's quest to renew the Spanish language to César Vallejo's linking of religion and politics, from Jorge Luis Borges's cosmopolitanism to Pablo Neruda's placement of poetry as uncompromising speaker for the downtrodden, and from Alejandra Pizarnik's agonies of the self to Humberto Ak'abal's examination of all things indigenous, it is through verse that the hemisphere's cantankerous collective soul in an age of overhaul might best be understood.

A brilliant, moving, and thought-provoking summation of these forking paths, The FSG Book of Twentieth-Century Latin American Poetry invites us to look at an illustrious literary tradition with fresh eyes. Ilan Stavans, one of the foremost scholars of Hispanic culture and a distinguished translator, goes beyond easy geographical and linguistic categorizations. This bilingual anthology features eighty-four authors from sixteen different countries writing in Spanish, Portuguese, Mapuche, Nahuatl, Quechua, Mazatec, Zapotec, Ladino, and Spanglish. The poems are rendered into English in inspired fashion by first-rate translators such as Elizabeth Bishop, Galway Kinnell, W. S. Merwin, Alastair Reid, Mark Strand, and Richard Wilbur.

In these pages the reader will experience the power of poetry to account for a hundred years in the life of a restless continent.


Praise For The FSG Book of Twentieth-Century Latin American Poetry: An Anthology…

“This ambitious anthology from critic and translator Stavans (Dictionary Days) attempts to introduce North American readers to the great strengths and the variety of Latin American modernity in verse. Beginning with the Cuban poet and patriot Jose Martí (1853–1895), Stavans's selection runs from the lushly formal nationalisms of a century ago (the Peruvian José Santos Chocano: "I sing American, in its wild and autochthonous state... When I feel Incan, I honor that king,/ the Sun"), through the world-renowned intellect of Jorge Luis Borges, the expansive passions of Pablo Neruda, and the tender bleakness of the great Brazilian Carlos Drummond de Andrade, to a wealth of less famous, more recent poets. The volcanic odes of the Mexican Gloria Gevirtz ("The cages enclosing the perfumes, the limitless delights/ the voluptuousness of being born again and again") continue Neruda's visionary tradition, while the compressed bite of the Guatemalan Mayaquiche Humberto Ak'abal brings in another. While Stavans translates many poems himself, many more are reprinted from extant versions by famous names: Mark Strand, Elizabeth Bishop, Eliot Weinberger, Ursula K. Le Guin. Presented in facing-page format, Stavans's anthology inclines to the accessible; specialists may be frustrated by a few points, but Stavans aims, instead, to bring a whole tree of poems and traditions to U.S. readers who do not know it well.” —Publisher's Weekly (starred review)

“A great introduction in English to the vast diversity of 20th-century Latin American verse, often as innovative as the Latin American novel.” —Lawrence Olszewski, Library Journal

“I feel like a punching bag after reading this anthology; repeatedly walloped by the force of the original poems and again by the translations. I had never read Mexican poets Enrique Gonzalez Martinez or Amado Nervo but for me they are now linked with the vibrant translations written by Samuel Beckett. I used to think Afro-Cuban author Nicolas Guillen's "Negro Bembon" and "Tu no sabe ingle" were all about what gets lost in translation from Cuban Spanish to American English. No more. Cuban American novelist Achy Obejas has written a daring interpretation that sounds just right in English. But it is Ursula K. Le Guin who has written the best translation of the bunch. For best, I mean effective plus beautiful. Le Guin's translation of a dreamy Gabriela Mistral poem is so good that it's almost as if the American and Chilean writers sat down to write the same work from scratch in two languages at the same time. "The Sleep-Wave" and "La Ola Del SueNo" read as if they were destined to be twinned.” —Luis Clemens, NPR

“Handsomely printed and designed, the collection has been astutely edited by Ilan Stavans, the prolific author and Amherst College professor who has done as much as anyone alive to bridge the hemisphere's linguistic gaps, and it boasts an all-star lineup of translators. In addition to Stavans they include W.S. Merwin, Richard Wilbur, Lysander Kemp, James Merrill, Robert Bly, Samuel Beckett and Ursula K. Le Guin. Many of the English-language versions that appear here, alongside the originals, are as good as we're likely to get for some time, perhaps ever. Most significantly, this hefty volume shows the ethno-linguistic breadth of what we lump under the monolithic term "Latin American" poetry. Like Walt Whitman's poetic Self, the bards of Latin America "contain multitudes." This volume includes works originally written not only in Spanish and Portuguese, but also in French, slangy Caribbean patois . . . and indigenous tongues, such as the Nahuatl of Mexican poet Natalio Hernández Xocoyotzin and the Mapuche of the Chilean Elicura Chihuailaf . . . Poetry in Latin America is still serious business and, as this fine collection reminds us, valued sustenance.” —Reed Johnson, Los Angeles Times

“Anthologies like this one are desperately necessary ... This anthology is alluring, seductive. It gives us a glimpse of a poetic tradition that, through translation, has bled across borders to soak into our own ... This anthology surpasses expectation. It is a book that will quickly become indispensable for studying poetry in Latin America in the twentieth century, and will certainly entice its students and readers to dive in to explore its riches.” —Erica Mena, The Quarterly Conversation

“A cornucopia of pleasures, some that come with a sapient sting, FSG's new bilingual anthology of Latin American poetry provides something for everyone in its great variety and generous, ecumenical selection ... the sweep and extravagance of mellifluous, unending lines ... create a daring trance seldom indulged in by English-language writers ... The varying styles of the translators ripple along pleasantly, as we enjoy the works that W.S. Merwin, Alastair Reid, Richard Wilbur, Stavans himself, and many others ... have produced over the years.” —Lynne Lawner, The Brooklyn Rail

“From introspection to protest, spirituality to eroticism, poets illuminate first cultures, colonialism, tyranny, war, liberation, and love over the course of the cataclysmic twentieth century, praising the beauty of the land and lamenting the elusiveness of justice.” —Donna Seaman, Booklist, (starred review)

“The most important and exciting anthology to come out this year.” —David Shook, Molosseus

“The reader dips into a dizzying array of styles, politics and obsessions originally expressed in various languages--Spanish, Portuguese, Quechua and Mazatec . . . For readers who can read the originals, the translations can open new meaning and subtlety . . . there is little to disagree with in the choices--of poets and their poems.” —Felipe Nieves, The Cleveland Plain Dealer

Ilan Stavans is the Lewis-Sebring Professor in Latin American and Latino Culture at Amherst College. His books include Spanglish, On Borrowed Words, The Poetry of Pablo Neruda, and Becoming Americans. His work has been translated into a dozen languages.